Cosmic rays and Lego at the IOP

A trio of school pupils presented their trailblazing project on cosmic rays to other students at the IOP. 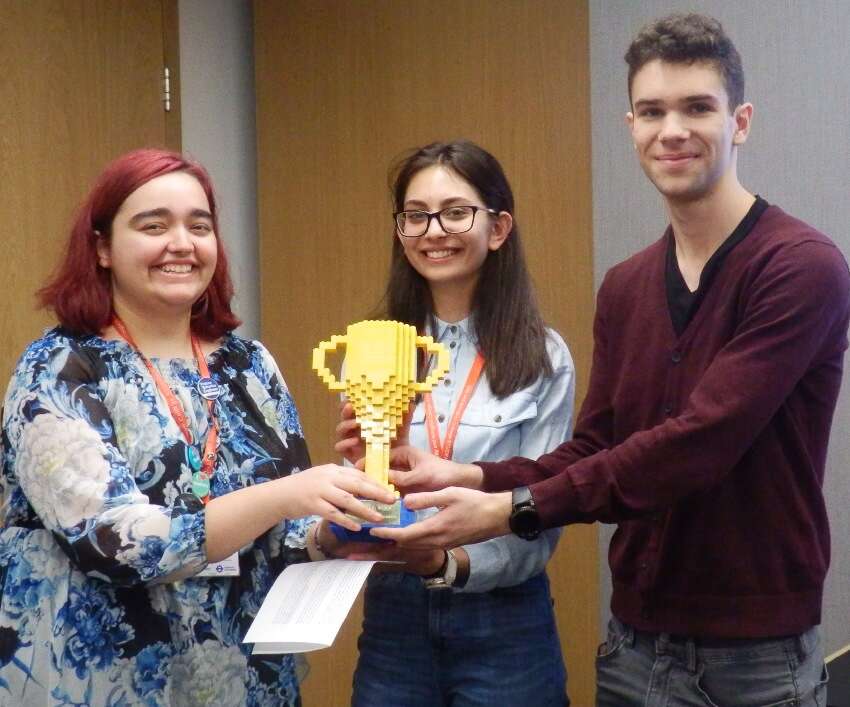 School students from City and Islington College, the first school pupils to construct a cosmic ray detector in London, took their research experience to the next level by presenting their award-winning project – Does air pollution affect cosmic rays? – to other Islington A-level students, at the Institute of Physics’ state of the art headquarters on Caledonian Road yesterday (January 14).

The youngsters, Toma Kolev (19), Merian Alit (17) and Dimona Videnlieva (19) – all sixth-form students – were awarded gold for the project at the HiSPARC Conference on Cosmic Rays, which took place at the University of Sussex.

As part of their presentation, they explained how airborne particulates impact on human health, and the role scientists can play in supporting the Clean Air Act.

HiSPARC (the High School Project on Astrophysics Research with Cosmics) is an international project in which secondary schools and academic institutions join forces and form a network to measure cosmic rays. The City and Islington students teamed up with the University of Bristol to build their detector, which they installed on the roof of the IOP building on Caledonian Road.

Cosmic rays are high-energy particles which travel from space – from stars, from supernovae explosions of stars and from other sources currently unknown to us – to the outer layer of the Earth’s atmosphere. They are high-energy particles, also called primary particles, which do not reach ground level because they collide with air molecules high up in the atmosphere. These collisions result in a shower of lower energy, sub-atomic particles, some of which reach the ground and can be detected.

Schools purchase the HiSPARC detectors, students build and install them on the roofs of their school (or in this case, the nearby IOP, which was the perfect location) and the detectors then measure the particles that rain down to the ground.

The school and college students analyse the data through guidance with researchers at numerous UK universities and the project gives students the opportunity to participate in real research, and find out more about these mysterious and rare cosmic particles.

All the HiSPARC detectors are connected to a central computer at the Dutch National Institute for Subatomic Physics (Nikhef) in Amsterdam through the internet, forming a large network.

As part of the evening’s activities, Dr Ben Still, physicist, author and science educator, gave a talk on how the investigation of cosmic rays led to the discovery of muons; strange particles which were readily made but reluctantly decayed – the start of a journey which ended in the discovery of quarks – through the medium of Lego.

Chris Shepherd, IOP teacher recruitment and retention manager, awarded the team a special Lego cup from the IOP. He said: “The new IOP site on Islington’s Caledonian Road is a unique public space where we hold family-friendly, community events and deliver outreach work across Islington.

"We run homework clubs in partnership with the Islington Science for Life network for local students studying GCSE physics, hosted a Children’s Science Conference that brought together over 50 primary school pupils from across Islington, and host family-friendly exhibitions and events programmes for our Islington neighbours which also bring visitors into the area.

“We were thrilled to have the students from City and Islington College build a cosmic ray detector on the IOP building’s roof, and even more so when they won the gold medal at this year’s National Science Conference at the University of Bristol.

“This project has given them hands-on experience of building and using real scientific equipment and a taste of what life as a physicist could be like. The detector is part of an international network. It is the first HiSPARC detector ever built in London, and we want local school students to continue to take part in the programme and enjoy the events and community hub the IOP has to offer.”

Watch the team building the HiSPARC detector and read more about cosmic rays.