The festival, with its mix of talks, demos, workshops and comedy, has been hailed a great success.

The festival relocated from Edinburgh to Glasgow this year, placing the Big Bounce in the heart of a Glasgow community, and bringing science outreach to new audiences – young and old – as it staged science experiences and entertainment, live on YouTube and Zoom.

Science talks and comedy, amazing demos, remote workshops, and fusion physics for all ages were live-streamed to screens across Scotland and beyond, between 31 October and 1 November, to inspire a new generation of physicists and physics enthusiasts.

Some local families also received free rocket balloon kits, as featured in the IOP’s Do Try This at Home video series, with all the equipment needed to have a go at some real rocket science. The kits were dropped off last week, to the delight of the families who received them.

One parent said: “I am so excited; we are going to start this right now!” 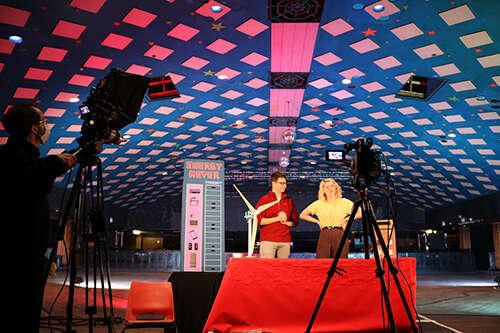 The Power Up! presentation at the Big Bounce 2020

It was the fourth year of the IOP’s annual festival of physics, newly renamed the Big Bounce, which is a celebration of innovation and exploration in physics, designed to capture the imaginations of all who attend and participate.

The Barrowland Ballroom sits right at the heart of its community; both figuratively and literally. A much-loved local venue, the ballroom is operating under Covid-19 restrictions so hosted a socially distanced cast of presenters and crew, who filmed and streamed Big Bounce festival events from the famous stage. For a limited period only, the ballroom became East Glasgow’s virtual science centre.

Mikey Jarrell from the IOP in Scotland is the festival organiser.

He explained: “We love sharing exciting physics with as many folk as possible; and where better next than in Glasgow’s East End? With the United Nations Climate Change Conference (COP26) heading to Glasgow next year, the whole city was able get excited about science and innovation.

“This year we had to do it all online, but all the fun was streaming from the Barras, and everyone could get virtually involved all weekend.”

Some of the great events enjoyed by those who watched included spooky Halloween talks and demonstrations of levitation, and a session with The Cabaret of Dangerous Ideas (CODI), who delved into how money and technology are already meeting, how machines are learning to write, and how intelligent robots could transform medicine.

Physicist and Everest mountaineer, Dr Melanie Windridge, explained why scientists have been chasing the fusion dream for so long, and the Scottish physicist with a love of dancing, James Rae, performed his way through an inimitable live-streamed presentation on climate change – using the medium of dance.

Those lucky enough to catch his performance will probably never forget dancing the CO2 wiggle and James playing the bagpipes, as he expertly explained the impact of greenhouse gases on climate and how we can all help care for our planet.

The Power Up! team of Chaz and Neil gave an illuminating demonstration of alternative energies, as they generated enough power to light up their dolls’ house using a mini windmill.

Viewers couldn’t help but be enchanted too by their little hydrogen-powered car, which travelled around the Barrowland Ballroom using the energy derived from a vessel of water in the ‘boot’.

Everyone was welcome to the Big Bounce, and there really was something for everyone. Compère Susan Morrison oversaw proceedings, chatting to performers, fielding questions from attendees and ensuring everyone had a great time.

The Big Bounce festival will be back in 2021, but you can still watch shows from this year’s festival on the IOP’s YouTube channel.