Working together to improve the workplace for LGBT+ scientists

Jennifer Dyer, Head of Diversity at IOP, on the culture for LGBT+ workers in physics and how we can work together to improve LGBT+ retention.

Along with our counterparts at the Royal Society of Chemistry and Royal Astronomical Society, the IOP recently reached out to the LGBT+ community in science to ask about the working culture from their perspective, through a survey called Exploring the Workplace for LGBT+ Physical Scientists (PDF, 3MB), answered by over 1,000 people.

While the results were encouraging overall, showing how far we’ve come over the last decade or so, the survey also indicated loud and clear that we have a long way to go before physics and the other sciences provide an inclusive, diverse and welcoming environment, particularly for LGBT+ women, those who are non-binary or our trans scientists.

Unsurprisingly, while our research found that while three-quarters (75%) of respondents said the workplace for LGBT+ physical scientists is comfortable, men felt more comfortable than women or trans respondents; gay men were more likely to feel accepted in the workplace than lesbian, bisexual, trans people or those questioning their sexuality. Meanwhile, over a quarter of respondents (28%) had considered leaving work because of the climate of discrimination, with trans scientists the most likely to consider leaving – a fifth considered it regularly.

While the statistics paint a very clear picture it’s important that we don’t see only see the issue in terms of data and statistics, or as a series of shock ‘headlines’ about outrageous behaviour which most people would probably regard as unacceptable. The truth of the problem is more subtle than that: harassment, offensive behaviour, marking individuals as ‘different’ and causing people to feel unwelcome in their place of work aren’t always immediately obvious or dramatic.

Some of the most damaging behaviour is the low-level, unremarkable, everyday ‘death by a thousand cuts’, as one LGBT scientist described it to me, and this is what we need to invest in training to tackle at all levels, from new starters right through to senior board level. These people live and work within our physics community and the evidence is clear: a happy workplace is more productive and therefore, quite simply, more conducive to good science.

In creating the survey and subsequent report, we at IOP and our counterparts seek to help employers and individuals to help cultivate a more positive atmosphere for us all. The situation will continually evolve, in science just as in the outside world, which is undergoing the kind of revolution we haven’t seen for generations. Just as campaigns like #metoo have spearheaded the way for people to stand up and say the way women are treated in their professional environments is not good enough and will no longer be tolerated, we need an equivalent in the world of physics and science, powerful enough to reach all those who might think the rules don’t apply in this scientific bubble.

"Some of the most damaging behaviour is the low-level, unremarkable, everyday ‘death by a thousand cuts’, as one scientist described it"

Following the publication of the report and the positive response to it, IOP and Royal Astronomical Society have set up a steering group, which will meet for the first time in September. The aim is that the group will work to create a plan to be up and running by the end of the year. Recommendations from the report and the steering group will provide a practical pathway for employers and employees alike in the world of the sciences. We will seek to provide advice which can be implemented as action by professional bodies and much of it will, of course, centre upon the employees who make up those organisations in the form of training and development.

IOP and the physics community

Here at IOP we’re doing what we can to make our workforce as diverse, equal and inclusive as we can. We’ve submitted ourselves to the same tests we judge other organisations by and we’ve applied for Juno Practitioner status, our own gender equality award scheme that has been so successful at transforming academic physics and creating equitable working cultures in which all students and staff can achieve their full potential.

It’s our hope and intention that, as the learned body for physics, we can lead the way and that as many others as possible will follow suit; tackling this type of problem demands a groundswell of support and action from across the board.

Where do we go from here?

When I started working at IOP ten years ago I wanted to include questions about sexual orientation in a members’ survey and was very firmly told that it wasn’t appropriate, it wasn’t relevant and it wasn’t our business to ask. The shift from then to now cannot be underestimated and the hope is, of course, that the time will come – and sooner, rather than later – when understanding about the importance of inclusion and diversity has become so evolved that there is no longer a need for this type of research.

"The world is changing and, slowly but surely, attitudes in physics are changing along with it"

Until then, I look forward to continuing to work with IOP, with the physics community and with our counterparts across the science world to continue the journey. Exploring the Workplace for LGBT+ Physical Scientists (PDF, 3MB) is another valuable step forward, setting a benchmark to work from, a line in the sand to see where we are now and to measure ourselves against when we go back to the community in a few years’ time to ask how further forward we’ve managed to get. A particularly heartening statistic from the report shows that 70% of respondents thought the climate was improving and I’m genuinely optimistic about progress – the world is changing and, slowly but surely, attitudes in physics are changing along with it. We just need to maintain our focus and, working together, change will come. 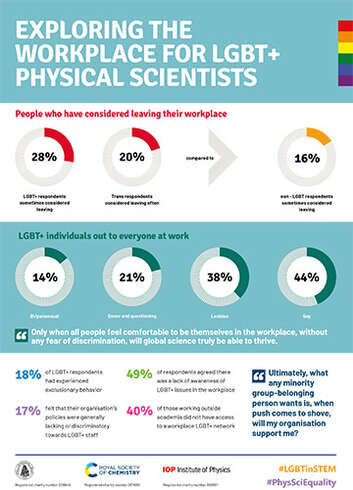 Percentage of people who have considered leaving the workplace (JPG, 232KB)

Percentage of LGBT+ individuals out to everyone at work (JPG, 279KB)