What do this year’s A-level results tell us about the current and future state of physics?

More must be done to make the subject attractive to girls and to make better use of physics to bolster the economy – but there are reasons for optimism.

A-level results provide a great opportunity to study changes in take-up and achievement, and reflect on the future of physics.

Although there has been a slight reduction in numbers from last year, more students studied physics than at any time this century before 2021. However, this is partly due to an increasing total cohort size. When viewed as a percentage of all exams sat, 4.7% of A-level students took physics, compared to 4.9% over the last three years – a drop back to 2018 levels.

This masks some national variation. While the situation in England matches the overall case just outlined, the percentage of students taking physics in Wales remained static at 5.6% compared to 2021 (the 1% drop in numbers matching the 1% drop in total A-level entries).

Northern Ireland saw a slight increase in both bulk numbers and the percentage of students taking physics, although these remain the lowest in the UK at 4%.

Despite an overall upward trend since 2006, this growth is nowhere near the amount needed by the UK economy. Physics makes an important contribution – valued at 11% of total GDP – but two-thirds of physics-based businesses reported suspending research and development (R&D) and innovation activities in the past five years due to skills shortages.

The percentage of girls taking A-level physics has remained steady compared to 2021 at 23% of the total number of students taking the subject (23% in England, 30% in Northern Ireland, and 22% in Wales). This comes after a decade of painfully slow growth – less than two percentage points over ten years.

Interestingly, the slight increase in total numbers of students taking physics in Northern Ireland is entirely due to an increase in take-up by girls. With Northern Ireland’s relatively small cohort size, we’d expect greater fluctuation between years and must not read too much into this result; the fact remains that girls are still significantly under-represented in physics. 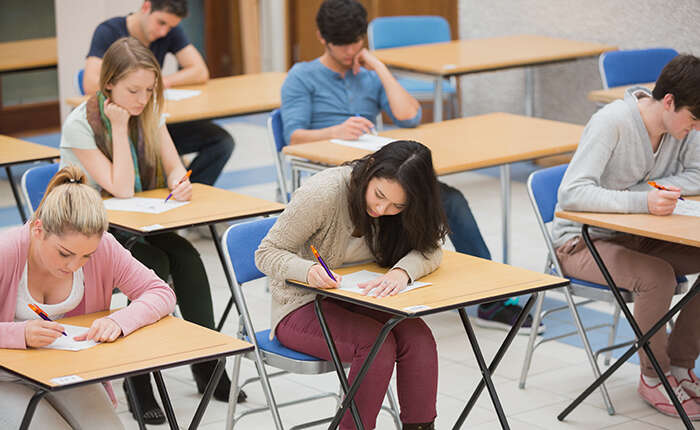 Why do so few young women take up physics compared to young men? A subject at the centre of much debate this year, it is a question of vital importance to the IOP. If we aim to tackle skills shortages reported by businesses, then the logical place to start is with the groups in society with the lowest take-up.

Rather than speculate on gender-based interests and proclivities, we have studied this imbalance systematically over a number of years, building up a wealth of evidence as to the reasons. This has included asking students directly through our Limit Less campaign. We found a significant reason was negative stereotypes embedded in a society that tells girls physics isn’t for them.

“To those only just starting to engage intellectually or practically with the world around them, how do we communicate the rich rewards to be had by studying physics?”

And these are definitively ill-founded stereotypes. Over the last decade, the percentage of girls graded A or A* in A-level physics has always been higher than boys.

Our work through the Limit Less campaign is aimed at overturning such tropes. We’re pressing for schools to take stereotypes seriously. They are, after all, limiting the options of half the population. We’ve made several recommendations on how this situation can be resolved, including calling for all schools to implement a ‘whole school’ approach to ensuring equity for all students.

At the IOP, we hear fascinating stories from physicists about their work every day. But to those only just starting to engage intellectually or practically with the world around them, how do we communicate the rich rewards to be had by studying physics? A great place to start is to enrich potential students’ experience of the subject earlier in their education pathway, which requires highly qualified and inspirational subject-specific teachers.

Finally, it is easy to forget, when looking at the statistics, that behind every number is an individual story of hard work. So, we’ll end with a huge congratulations to all students who have received a physics grade this year.

We are pleased to see that there has been a significant increase in the numbers of students receiving A and A* grades compared to 2019 (of around 10%). While grades are down slightly from 2021, that year and 2020 saw high grade inflation due to the pressures of COVID-19 altering the marking scheme.

The Joint Council for Qualifications has advised grade comparisons be made against 2019 and before. Physics grades in fact gradually decreased from 2012 to 2019 and so it is great to see such a significant improvement this year. This is testament to the hard work put in by students during a very challenging period.