For his pioneering contribution towards the industrial deployment of cosmic-ray muography technology and his outstanding, ongoing contributions to high-energy, fundamental nuclear physics experiments across the globe. 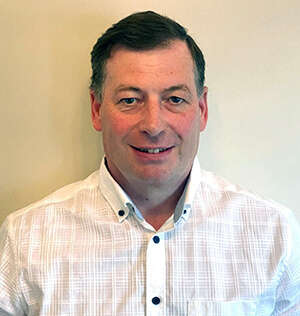 In the 17 years that Tony Clarkson has been a nuclear physics technician at the University of Glasgow, he has led the development of cutting-edge particle detectors for fundamental physics projects across the globe.

These multi-million-pound UK Research and Innovation-funded experiments all shed unique light on the structure of the nucleon.

The most significant contribution he has made in this time has been within the ‘Muography Project’.

In 2009, the university received funding from the Nuclear Decommissioning Authority (NDA) in industrial collaboration with the National Nuclear Laboratory and Sellafield to develop a particle detector system to passively inspect the contents of legacy nuclear waste containers using naturally occurring background radiation.

Over a seven-year period, the NDA invested £4.8m. Tony designed and constructed the prototype imaging systems during this project and was lead author on two peer-reviewed publications – an uncommon achievement for a technician.

In 2016, Lynkeos Technology spun-out from the university and was awarded a £1.6m Innovate UK contract to commercialise this technology. Tony was seconded to Lynkeos to lead the design, construction and deployment of an industrialised system at Sellafield.

This included achieving the worldwide first CE Certification of a large-scale particle tracker and the first deployment of muography technology within the global nuclear industry.

Tony is a world leader in this fast-growing field that has huge potential to significantly impact upon the safety and cost of nuclear decommissioning.

The installation of this system at Sellafield resulted in a number of high-profile awards including the 2018 IOP Business Start-Up Award. This is testament to Tony’s experience, skill, dedication and hard work.

Tony is an inspiration to all within the nuclear physics group at the University of Glasgow. The team of technicians has always been the beating heart of our research group.

In 2017, the group lost its beloved senior technician and Tony’s long-term friend and mentor. Tony was the group’s rock during this difficult time and has seamlessly shouldered the additional technical burden ever since in addition to training a junior technician.

His work within the university has spanned education, research and industry and has had significant impact upon all of these areas. He has been critical to international research at the cutting edge of fundamental nuclear physics, world-leading applied research into muography, and has assisted over 30 PhD students.

His IOP Technician Award is richly deserved for a much-loved, respected and influential technician.