For pioneering work exploring the nonlinear dynamics and predictability of the climate system and for developing ensemble prediction systems that quantify the flow-dependent uncertainty of weather and climate forecasts. 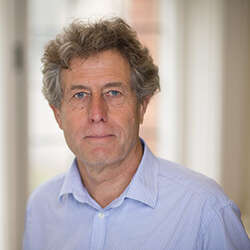 During a long and remarkable career, Professor Tim Palmer has pioneered the application of nonlinear dynamical thinking to improve our understanding of the climate system and in so doing has had a profound influence on our ability to predict weather and climate.

Palmer’s most important contribution has been in the development of the probabilistic ensemble prediction system. Prior to this, weather forecasting was considered a deterministic process, where best-guess models were run from best-guess initial conditions.

But chaos theory, as advocated by Edward Lorenz, demonstrates that predictability of the atmosphere (and oceans) is far from deterministic. Palmer was among the first to recognise the fundamental importance of chaos theory in weather and climate prediction.

The development of the European Centre for Medium-Range Weather Forecasts ensemble prediction system, pioneered by Palmer and implemented in 1992, was groundbreaking.

In the subsequent years, Palmer developed novel techniques to represent initial condition as well as model uncertainties, which ensured that the ensemble probabilities were statistically reliable.

Ensemble predictions systems are now used universally in national meteorological services around the world for forecasting on all timescales from hours to decades. Based on probability thresholds, ensembles now form the basis for decisions on when to take anticipatory action, for example by disaster relief agencies ahead of severe weather events.

Palmer has also had a significant influence on our understanding of the nonlinearity of stochastic processes and scale interactions in weather and climate systems. He has shown how stochasticity in climate models can help reduce their systematic deficiencies, and he has been a powerful voice in the arguments for much higher resolution climate models that can represent nonlinear scale interactions.

Palmer has pioneered the concept of a ‘CERN for climate change’, where human and computational resources are pooled to develop climate models of unprecedented resolution, and hence accuracy and skill. This concept is starting to take shape through the EU’s billion-euro Destination Earth programme.

Palmer is an outstanding physicist whose influence on the science of weather forecasting and climate prediction has been profound and for which he is widely recognised internationally as a pioneer in his field.