For his major contributions to physics through his pre-eminent research, his influential leadership roles and his service to the Institute of Physics. 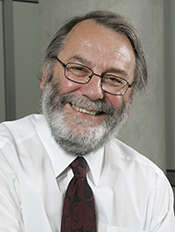 Peter Knight’s research has been at the forefront of quantum optics and quantum information science.  He established the theoretical quantum optics group at Imperial College London and has played a leading role in training and mentoring a generation of quantum physicists.  As Deputy Rector (Research) at Imperial he was responsible for the overall research strategy of the College, determining research priorities and providing high level coordination of initiatives requiring interdisciplinary working and cross Faculty engagement.  He played a key role in the initiatives which led to the creation of the Grantham Institute for Climate Change, the Institute for Shock Physics and the Centre for Security Science and Technology.  He was knighted in 2005 for his work in optical physics and elected FRS in 1999.

Knight’s work in the wider physics community has been as influential as his research; he has served as Chief Scientific Advisor to the National Physical Laboratory, was a Council member of the Science and Technology Facilities Council; until December 2010 he chaired the Defence Scientific Advisory Council at the UK Ministry of Defence, and he remains a Government science advisor. He was the first non-US based President of the Optical Society of America (2004) and served as President of the Institute of Physics from 2011 – 2013 during which time he championed the Institute’s first major fundraising campaign, ‘Opportunity Physics’.