For his major contribution to physics through seminal research in surface science, photonics and metamaterials and through service to the Institute. 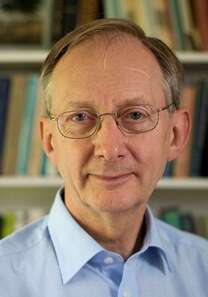 John Pendry is a leading UK physicist of international renown. He has the rare distinction among scientists of having established a completely new and unexpected area of research – metamaterials. The electromagnetic properties of materials – such as electrical conductivity – were standardly thought to depend upon the properties of the materials of which they are composed. In the case of metamaterials, however, their electromagnetic properties depend upon their structure: this has had a tremendous impact, enabling the identification of new properties not found in nature.

Pendry’s perfect lens makes use of such a novel property – negative refraction – and is a remarkable example of the revolutionary nature of metamaterials. Negative refraction had been postulated in the 1960s by Victor Veselago, but no examples of the phenomenon had been found in nature. Using the metamaterials proposed by Pendry, David Smith’s team, then at the University of California, San Diego, combined magnetic and electrical metamaterials to construct the first negatively refracting metamaterial. Moreover, Pendry discovered that a lens manufactured from negatively refracting material would circumvent Abbe’s diffraction limit to spatial resolution, which has stood for more than a century. In this way he gave the first prescription for a perfect lens – one whose resolution is limited only by the perfection of manufacture.

More recently, in collaboration with a team of scientists at Duke University, he has deployed transformation optics to develop a cloak of invisibility that has attracted worldwide public interest. The cloak can hide objects from electromagnetic fields, and a version of this design working at radar frequencies has now been implemented experimentally.

Pendry has also made a full contribution to the wider scientific community through roles at the lOP and other organisations. Between 2007 and 2011 he served on the Institute's Council as vice-president for publishing and as chair of the lOP Publishing board. At the Royal Society, he was elected a fellow in 1984, was a member of council over 1992-4 and was editor of Royal Society Proceedings A between 1996 and 2002. He also served as chair of the physics sub-panel of the 2008 UK Research Assessment Exercise from 2005.

He has received numerous honours including the lOP’s Isaac Newton Medal in 2013, the Kavli Prize of the Norwegian Academy of Science and Letters in 2014 and the Dan David Prize in 2016. In 2004 he was honoured with a knighthood for his services to science.