For being among the pioneers of the field of complex networks, and in particular the sub-field of interacting networks based on statistical physics and percolation theory. 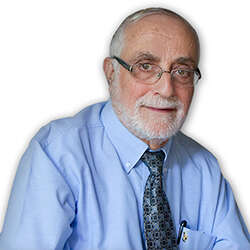 Professor Shlomo Havlin has been one of the leading pioneers of the rapidly expanding multidisciplinary field of network science that emerged in 2000.

He and his students developed the first percolation theory approach that proved that complex networks are in a new, previously unknown universality class.

They discovered, for example, an unusual robustness in these networks (an absence of percolation and epidemic thresholds) and novel critical exponents. This breakthrough led to a cascade of further discoveries by Havlin and others of many new laws governing the structure and function of complex networks and understanding open questions in many disciplines.

These discoveries include, for example, the ultra-small-world concept, showing that the diameter of modern networks of N nodes is dramatically smaller than the diameter of random (Erdős-Rényi (ER)) networks and scales as log log N instead of log N in ER networks.

Havlin’s group extended these studies and developed an efficient immunisation strategy for computer and population networks. This useful approach, called the acquaintance immunisation approach, reduces the critical threshold of immunisation by a factor of three.

In 2005, Havlin and his colleagues developed a novel approach for studying self-similarity in networks. They found that fractal features exist in many complex networks, a result that led to a better understanding of the topology and function of complex networks in many disciplines. His book Complex Networks with former student Reuven Cohen (now professor of mathematics) is a classical textbook in the field of network science.

The general analytical results and Havlin’s discovery of a rich behaviour that does not exist in single, isolated networks show that percolation theory of single networks is a specific limited case of the general category of networks of networks.

The rich, novel phenomena found in networks of networks, including the strong influence of spatial embedding, a new localised type of failure and the phase diagram when recovery of nodes is introduced, are among the recent discoveries of Havlin’s group.