Department of Chemistry, University of York.

For his major contributions to physics through his influential research on liquid crystal materials and displays. 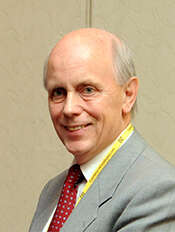 Following degrees in physics at the University of Cambridge, Peter Raynes dedicated more than 40 years to scientific research into liquid crystals materials and devices after joining the Royal Signals and Radar Establishment at Malvern in 1971, where he remained for 21 years.

Raynes has played a crucial role in the development of liquid crystal displays (LCDs): a technology that is now used by the vast majority of televisions and computers. Raynes’s inventions and techniques played a vital role in putting LCDs in the prime position that they are in today: they have been licensed to the world’s major manufacturers and have resulted in royalties to the UK of over £100 m.