For his major contributions to physics and science education nationally and internationally, through his successful advisory and leadership roles, leading to many important innovations including framing the National Curriculum. 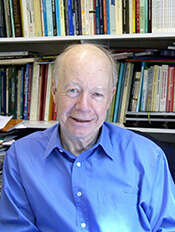 Paul Black is an eminent figure at the forefront of physics and science education in the UK, with a reputation that is held in high regard internationally. Following an early career as a university research physicist, in 1976 Paul became the professor of science education and director of the Centre for Science and Mathematics Education at Chelsea College in London. In 1985 he became the head of the King's Centre for Educational Studies with the merger of Chelsea College and King's College London. His extensive work with the Nuffield Foundation focused on curriculum development in science and in design and technology at primary, secondary and tertiary levels.

Black's contributions have been far reaching and have led to many important innovations in physics and science education. He was chair of the government's Task Group on Assessment and Testing, charged with recommending the new framework for national assessment, and subsequently, particularly in his role as deputy chairman of the National Curriculum Council, made important contributions that included the careful and well-tested design of effective testing as well as the framing of the curriculum. As a member of the Policy Advisory Group and of the Technical Advisory Group of the UK examination and qualifications regulator, Ofqual, he has had a huge influence on past and current thinking about the roles and nature of assessment, particularly the importance of formative assessment in encouraging better learning.

Black has been a visiting professor at Stanford University and has served on three committees of the US National Research Council. He has received numerous honours for his achievements; in 1973 he was awarded the Bragg Medal and Prize of the Institute of Physics. In 1983 his innovative work was recognised with an OBE for services to education. In 2005 he received a Lifetime Achievement Award for Outstanding Contribution to Science Education, from the Association for Science Education, and a Lifetime Achievement Award from the US National Association for Research in Science Teaching.