For his outstanding contributions to research in optical fibre sensors, optical instrumentation and laser-material interactions, and his ongoing and exceptional service to the Institute of Physics and IOP Publishing. 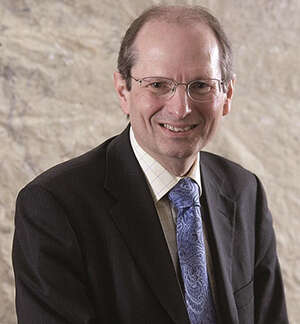 Professor Julian Jones, vice-principal of Heriot-Watt University since 2010, has held the post of honorary treasurer of IOP for eight years. He is a trustee of the IOP Pension Fund and chairs the Benevolent Fund.

He has previously chaired the IOP’s Optics and Photonics Division, the Optical Group, the Institute of Physics in Scotland and the IOP’s Scottish Education Committee. He has been a member of the IOP’s Education Board and its External Affairs Committee.

He was also editor of the IOP’s Journal of Measurement Science and Technology from 1992 to 1999.

Jones is a fellow of the IOP and of the Optical Society of America. He is also a Fellow and member of the Council of the Royal Society of Edinburgh.

In 1988, at Heriot-Watt University, Edinburgh, he established a research group in optical-fibre sensors, optical instrumentation and laser-material interactions; he has over 500 publications.

In 1992 he became professor of engineering optics, in 1998 head of physics and in 2002 head of the school of engineering and physical sciences. In 2007, he became deputy principal for strategy and resources.

Jones’ research has concentrated on instrumentation based on optical fibres. He serves as general secretary for the International Conference on Optical Fibre Sensors.

A representative selection of his work with his colleagues has included: monitoring techniques for laser welding; instrumentation for jet-engine design experiments; pressure sensors used in experiments for mitigation of terrorist explosions; fluorescence techniques for detection of contamination in surgical instruments; the first quantitative measurements of wing-shape in natural insect flight; and more.

He has received prizes from the IOP and the Institution of Mechanical Engineers. He has delivered the Royal Society/IOP Sir Charles Parsons Memorial lecture and received the accompanying medal.

He was appointed as an officer of the Order of the British Empire in the New Year’s honours of 2002, ‘for services to science and engineering’.