For his outstanding work in theoretical particle physics and cosmology, his encouragement and support of scientists from countries across the world seeking international collaboration, and his outreach work inspiring the public. 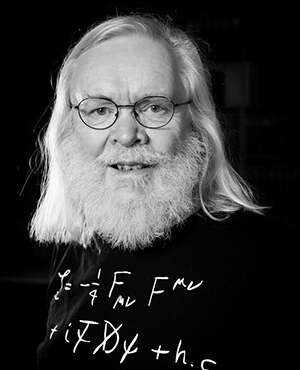 Professor John Ellis is an internationally renowned theoretical particle physicist, with fundamental contributions to the phenomenology and theory of elementary particle physics.

He pioneered phenomenological studies of the Higgs boson in 1975. The discovery of the gluon by experimental teams at Deutsches Elektronen-Synchrotron DESY in 1979 was based on an idea he published in a paper in 1976 and suggested to them.

He continues to be very active in research, producing works in the fields of: (i) collider physics, analysing the properties of the Higgs boson and other LHC data, (ii) cosmology, where he has proposed pioneering models of inflation based on supergravity models, (iii) quantum gravity, suggesting tests of quantum gravity models (for which he has been co-recipient in 1999 and 2005 of the first award in the Gravity Research Foundation (USA) Essay competition), in particular using multi-wavelength and multi-messenger cosmic observations, and (iv) dark matter and gravitational waves, promoting through his leadership role in an innovative UK-based research consortium (the Atom Interferometer Observatory and Network Project) novel searches for ultralight dark matter and studies of mid-frequency gravitational waves, using innovative state-of-the-art atomic interferometers.

Much of John Ellis’s research work has concerned the prospects for particle accelerators such as CERN's past, present and future colliders.

He is known for his efforts to develop global collaboration in CERN's scientific activities.

In the context of the LHC, he has interacted frequently with physicists, funding agencies, ministers and diplomatic missions from a wide variety of countries, ranging from major CERN partners like the United States, Russia, Japan, Canada, India, Israel and China, to states with developing particle physics programmes such as Argentina, the Baltic republics, Colombia, Egypt, Iran, Morocco, New Zealand, Pakistan, Palestine, Romania, Rwanda, Serbia, South Africa, Singapore, Sri Lanka, Turkey, the UAE and many others.

These interactions have fostered the international character of CERN.

In parallel, his many public lectures in the UK and elsewhere have opened pathways of scientific discourse all around the world.