For his outstanding contributions as a broadcaster and presenter in communicating science to the public. 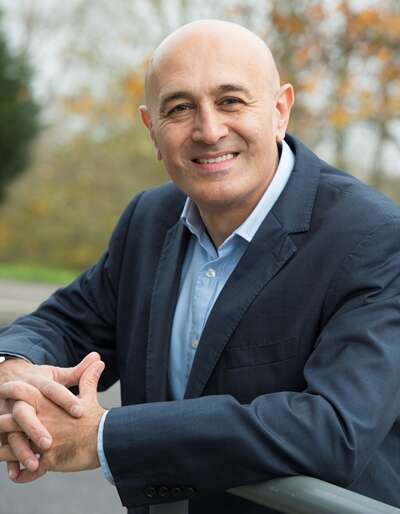 Professor Jim Al-Khalili received his PhD in nuclear reaction theory in 1989 under the supervision of Ron Johnson and Jeff Tostevin, with a thesis titled Intermediate Energy Deuteron Elastic Scattering from Nuclei in a Three-Body Model and has gone on to publish over 100 papers in the field. Since 2005, he has held a joint professorship of physics and in the public engagement in science at the University of Surrey where he also holds a University Distinguished Chair. He is currently co-director of the Leverhulme Doctoral Training Centre for Quantum Biology where he is still trying to make sense of quantum mechanics. But it is not for his influential research that he is best-known. He is also an outstanding communicator of science.

Al-Khalili is a prominent author and broadcaster. He has written 13 books, between them translated into over twenty-five languages. One of them, Pathfinders: the golden age of Arabic science, was shortlisted for the Warwick Book Prize in 2013, while Life on the Edge: the coming of age of quantum biology was shortlisted for the 2015 Royal Society Winton Prize. This year saw the publication of his first novel, a science fiction thriller called Sunfall.

Al-Khalili is a regular presenter of TV science documentaries, including the BAFTA nominated Chemistry: A Volatile History and Shock and Awe: The Story of Electricity. Most recently, he presented the BBC4 six-part documentary series, Revolutions: Six Ideas that Changed the World. For the past eight years he has presented the award-winning weekly BBC Radio programme, The Life Scientific, and recently interviewed his 200th guest.

A trustee and member of Council of the Institute of physics, Al-Khalili has, over the years, served on many of its committees and boards, including chair of the Nuclear and Particle Physics Division (2001–2005). He is a board member of CaSE (The Campaign for Science and Engineering), a member of the judging panel of the Queen Elizabeth Prize for Engineering and the Royal Society’s Education Committee. He recently stepped down as President of the British Science Association. He is a recipient of the Royal Society Michael Faraday medal, the IOP Kelvin Medal and the Stephen Hawking Medal for Science Communication. He received an OBE in 2007 for ‘services to science’ and was elected a Fellow of the Royal Society in 2018.