For the development of fundamental physical models, simulation tools and experiments to discover and exploit relationships between the performance of solar cell devices and properties of their constituent materials. 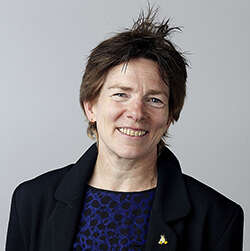 Professor Jenny Nelson is distinguished for driving the science and development of fundamental physical models, simulation tools and experiments to discover and exploit relationships between the performance of solar cell devices and the physical and chemical properties of their constituent materials.

She has had a profound influence on the development of the science underpinning solar photovoltaic (PV) technology.

The uptake of PVs has been limited by the historically high prices of crystalline silicon conversion devices. As a result, new materials and solar device concepts based on dye-sensitised and organic photovoltaic materials have emerged with potential for lower cost electricity. However, in every case, the performance of early devices was disappointing.

Although of intense interest as a route to inexpensive, diverse and flexible electronic components, the relationship between the chemical structure, optoelectronic properties and behaviour of these materials and devices was not well understood, with the result that new materials were developed by trial and error rather than rational design.

During the last three decades, Nelson has delivered seminal contributions to functional understanding of organic and hybrid PV materials and devices, rationalising the relationship of structure to device performance leading to her most sustained and groundbreaking experimental and theoretical studies.

The modelling tools she has developed have been adopted by companies and other groups more widely, including a kinetic Monte Carlo that was provided to and used by BASF in development of molecular design models, and transfer-matrix optical modelling code used by the University of Warwick and by start-up Molecular Solar.

She has engaged with policy development in renewable energy technology whilst head of the climate change mitigation team at the Grantham Institute – Climate Change and the Environment at Imperial College London, presenting to government representatives, the International Energy Agency, the Royal Society and businesses.