For her significant contributions to particle physics, her advisory role in the UK and internationally, and founding the Conference for Undergraduate Women in Physics series in the UK. 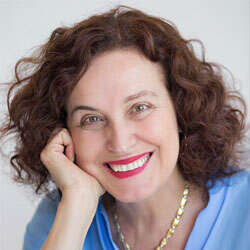 Professor Daniela Bortoletto has contributed to significant particle physics discoveries and has developed the precision scientific instruments that enabled them.

She started working on Higgs physics after participating in the top quark discovery with the Collider Detector at Fermilab experiment. As a member of the Compact Muon Solenoid (CMS) experiment at the Large Hadron Collider, she contributed to discovering the Higgs boson in the decay channel with electrons and muons.

She also searched for higher-mass Higgs bosons and set the first bounds on the Higgs boson width.

In 2013, Bortoletto joined the University of Oxford and the ATLAS collaboration. Her group made significant contributions to understanding the Yukawa interactions by playing an essential role in discovering the Higgs boson decay to a pair of beauty quarks and setting the best limits on the coupling of the Higgs boson to the charm quark.

Bortoletto has had a significant role in designing, building and operating silicon detectors, including CDF SVX II and the CMS Pixel detector.

She is currently co-leading the UK module production for the ATLAS pixel detector HL-LHC upgrade, constructing ultralight detectors for the Mu3e experiment and developing novel silicon detectors for experiments at future colliders.

Bortoletto has been an outstanding leader in organising the development of detectors for the next generation of particle physics experiments as the deputy scientific coordinator of the EU research and innovation programme AIDA-2020 (2017-20). She is continuing this role in AIDAinnova (2021-25), a consortium including 42 institutions from 15 countries receiving €10m (£8.4m) from the EU.

She has been a member of many advisory panels to UK and US funding agencies, laboratories and experiments, including the US Particle Physics Projects Prioritization Panel (P5), the UK Science and Technology Facilities Council Technology and Accelerator Advisory Board, and the Fermilab Program Advisory Committee.

Bortoletto has also made significant contributions to gender equality in physics. She was the founder and lead organiser (2015-19) of the Conference for Undergraduate Women in Physics in the UK (CUWiP UK), which attracted around 100 young women each year to Oxford.

Since 2018, she has worked with the IOP to make CUWiP UK more accessible by taking it to different universities around the nations and regions.

The University of York hosted CUWiP UK in 2020, and in 2021 an online CUWiP UK was organised by the University of Southampton. In 2022, 2023 and 2024, CUWiP UK will be hosted by the universities of Glasgow, Liverpool and Limerick respectively.