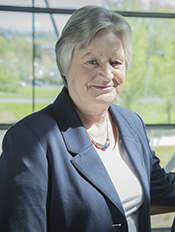 Julia Slingo’s long-term career in climate modelling and services to meteorology have proven pioneering fundamental research, particularly on tropical weather, climate variability and change, including the possible impacts on food and water security.

Slingo’s early career spanned across the UK and the US in developing the way that physics is used in weather and climate modelling and she became the UK’s first female professor of meteorology.

As the chief scientist for the Met Office, Slingo is distinguished for her expertise in scientific and technical strategy, delivering the UK’s first 1 km-resolution weather forecast model, enhancing the skill of seasonal climate predictions and driving the development of the next generation UK Earth system model, which will form the basis of the next generation of climate models. She has also fostered much stronger research partnerships with the Natural Environment Research Council (NERC) and UK academia.

Before joining the Met Office, Slingo was the director of climate research in NERC’s National Centre for Atmospheric Science at the University of Reading, where she set the UK’s climate strategy and provided a significant contribution to the Stern Review, while continuing as Professor of Meteorology.

In 2006 she founded the Walker Institute for Climate System Research at Reading, aimed at addressing the cross-disciplinary challenges of climate change and its impacts. In 2007 Slingo was appointed to the Joint Scientific Committee of the World Climate Research Programme and in 2008 she was appointed as the first female president of the Royal Meteorological Society.

Prof. Julia Slingo was awarded the DBE for services to meteorology in 2014 and in May 2015 she was elected to Fellowship of the Royal Society.