For her world-leading achievements in particle physics research and her sustained record of outstanding academic leadership. 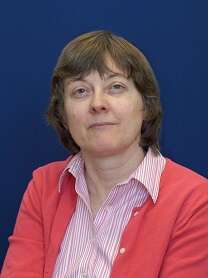 Professor Christine Davies is an outstanding theoretical particle physicist who has made a series of world-leading contributions to the field of lattice quantum chromodynamics, developing it into a precision tool for strong interaction physics and leading a series of state-of-the-art calculations that have become a crucial component of the particle physics landscape in the LHC era.

Her publications are extremely well cited, and she has given more than 30 invited review talks at major international meetings since 2000. She has been PI on grants totalling more than £3m since 2005, has supervised 14 PhD students and has directed the work of 20 postdoctoral researchers. Christine is a Fellow of the Institute of Physics, the Royal Society of Edinburgh, and the American Physical Society.

In 2005 she was awarded the Rosalind Franklin prize by the Royal Society and in 2006 an OBE in the Queen’s 80th birthday honours list. She has also won the IOP High Energy Particle Physics Group Prize and Nuclear and Particle Physics division prize. She previously held a Royal Society Leverhulme Trust senior research fellowship and a Wolfson Research Merit Award.

Over several decades Davies has also shown outstanding and sustained leadership within the broader physics community. She was a member of the Wakeham Committee, has chaired the IOP Diversity Committee and served on IOP Council and the Athena Forum. She is currently a member of STFC Science Board and was elected chair of the Project Board for Phase 2 (2011–17) of STFC’s Distributed High Performance Computing Facility (DiRAC).

Davies is a committed champion for public outreach and for more than a decade has been a pioneering advocate of initiatives to promote inclusion, equality and diversity in physics.