For his outstanding contribution to the development of research in sensor physics and his continued leadership and contributions to excellence in physics and science education. 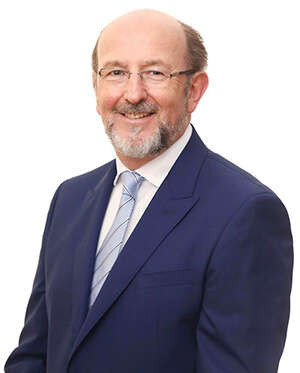 Professor Brian MacCraith is a world-renowned leader and advocate for physics.

He has a substantial track record of publications and intellectual property in the areas of optical chemical sensors and biosensors, biomedical diagnostics, and nanobiophotonics.

MacCraith is currently president of Dublin City University (DCU) and over the past 10 years, under his leadership, DCU has developed significantly in terms of scale, footprint and reputation.

He was founding director of the National Centre for Sensor Research at DCU. He led the proposal to establish the Biomedical Diagnostics Institute, a Science Foundation Ireland Research Centre at DCU, and was appointed as its first director.

A spin-off company (Gas Sensor Solutions), based on technology developed by MacCraith, won the Liavan Mallin Invent Award for innovation. He led the proposal which resulted in the establishment of the Nano-bioanalytical Research Facility in DCU.

MacCraith’s contributions have been far-reaching and have led to many important innovations in physics and in science education.

During his presidency, DCU has also developed a significant international profile with major academic and research partnerships across the globe and a strong reputation for innovation, and is ranked consistently as one of the world’s top young universities.

At a national level, he has chaired a number of important reviews on behalf of the Irish government: The Strategic Review of Medical Training and Career Structures (2014) and the Review of STEM Education in the Irish School System (2016).

In July 2019 he was commissioned by Ireland’s national health service, the Health Service Executive, to conduct an Independent Rapid Review of Specific Issues in the CervicalCheck Screening Programme.

He chairs the Board of SciFest (a not-for-profit organisation focused on promoting STEM education through student participation in science fairs) and the Board of Trustees of Genio.

He is a board member of the following organisations: Social Entrepreneurs Ireland, Ibec (formerly the Irish Business and Employers Confederation) and Chamber Choir Ireland.

As a recognised leader, MacCraith has recently been appointed as the chair of the Commission on the Future of Public Service Broadcasting in Ireland by the Office of the Taoiseach.

He was awarded an honorary doctorate by the University of Massachusetts, Lowell in 2014.