For her contributions to the field of physics education. 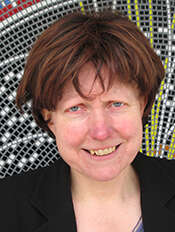 The Langton Star Centre, developed by Parker, is a specialist facility with laboratories, classrooms and an astronomical observatory where students are given the opportunity to join collaborative astronomy and space projects, with the most prominent of these being the Langton Ultimate Cosmic Ray Intensity Detector (LUCID).  She and her pupils work across regional and national boundaries, collaborating with NASA and ESA scientists and schools in the UK and elsewhere in the world.

Becky’s innovative and inspiring approach to teaching can be seen in the large number of students taking A level at Langton and through those going on to study physics and engineering at university; it is estimated that their pupils make up 1% of the national cohort of physics undergraduates.  Girls join the school in the sixth form and it is estimated that around 2% of the cohort of female physicists at University come from the school.

Dr Parker is also well known for her public engagement work having given numerous public lectures as well as appearing on TV and radio.  She was awarded an MBE in 2008 for services to science and education.