For outstanding and ongoing contribution to business in the field of physics-based technological innovation, scientific advances of immeasurable significance, and commitment to the global advancement of security and our health. 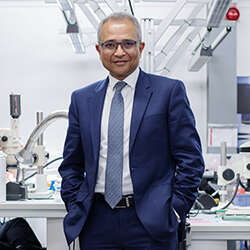 A passionate advocate of the application of physics to bring about transformative change, Dr Arnab Basu seeks to solve everyday problems by developing detection solutions based on high-performance sensor materials, for the greater security of, and improving the health of, society.

A prominent figure in the business community, he is already a Fellow of the Royal Society of Arts and the Institute of Directors, and current chair of the Academic Health Science Network for the North East and North Cumbria.

As founding chief executive of university spin-out Durham Scientific Crystals (DSC), he has built a company to commercialise 20 years of research into the manufacture of semiconductor material cadmium zinc telluride (CZT).

DSC rebranded as Kromek in 2010 and, from a two-person operation, he has overseen a period of sustained growth through acquisition, as well as market and application expansion. Today, the company employs more than 150 people across four locations: in Pennsylvania and California, and at two sites in the UK.

With nearly 300 patents to its name, the company has been regularly singled out and lauded as one of the most innovative in the UK, winning numerous awards for innovation and technological achievement, including an IOP Business Innovation Award in 2016.

With Basu’s leadership, Kromek has specialised in developing sensitive detection equipment uniquely capable of identifying threat materials, whether they be liquid explosives or other hazardous substances, emissions from radioactive materials, or new generations of detectors, promising fundamental improvements in medical diagnostics.

Basu’s vision and dedication have been rightly recognised. In 2009, he won Ernst & Young’s Entrepreneur of the Year. In 2014, he received an MBE for services to regional development and international trade. Northumbria University made him an Honorary Doctor of Science in 2017. He was awarded Innovation Director of the Year 2019 by the Institute of Directors. And in 2020, he was appointed Deputy Lieutenant of County Durham.

Few people achieve the level of success Basu has in such a short time, making him a worthy Honorary Fellow of the IOP.