Mark Anderson for building and developing systems that contribute to advancement of our scientific understanding and knowledge of the universe during over two and half decades at the Science and Technology Facilities Council. 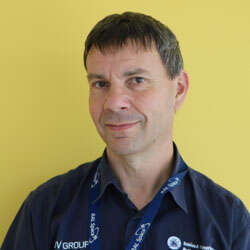 Starting his career as an apprentice, Mark Anderson has spent almost 40 years working in the science and research industry, with the last 23 years working at RAL Space, Science and Technology Facilities Council (STFC). Throughout this time, he has worked on multiple space and science instruments including being the primary technician on the build team for the SPICE instrument aboard Solar Orbiter and MIRI for the James Webb Space Telescope (JWST). As well as assisting with the MIRI build, Anderson supported the assembly and build of the instrument test facilities. He also designed, built and installed all of the unique multilayer insulation for MIRI and travelled to NASA several times to integrate it onto the instrument on JWST. This rich and varied career has resulted in Anderson being the most experienced technician in the RAL Space Production team, where he leads the manufacturing assembly integration and test activities on several space-based instruments and ground support projects. As well as this, he relishes mentoring junior team members.

Anderson joined the RAL Space Assembly Integration Verification (AIV) team as a technician, operating and maintaining the vacuum test chambers, building instrumentation, and designing and building multilayer insulation. As RAL Space expanded, the AIV team became the Environmental Test Division, which focused on running the facilities. Anderson left the team and formed the RAL Space Production team to specialise in manufacturing, assembly, integration and testing (MAIT) activities for deliverable projects. Projects at RAL Space encapsulate both space-based and ground support applications. Anderson created the Production team from the ground up, externally hiring new technicians to create the team as well as defining the scope for the group. Last year, having formed an established group, he stepped away from his position as group leader to concentrate on his role as the MAIT technical expert for the group.

Anderson is constantly seeking to improve his knowledge and the environment in which he works. He has worked within government research organisations for his whole career, but is determined not to become institutionalised and closed-minded in his thinking. He loves talking to people who have joined RAL Space from external organisations and considering how their knowledge can help RAL Space be more effective in its goal of carrying out world-class research and technology development. For example, over the past year Anderson was one of the instigators for a continuous improvement activity to improve the stores within RAL Space.