Professor Daniel Frenkel for seminal contributions to the understanding of the kinetics, self-assembly and phase behaviour of soft matter systems, and for developing highly innovative and influential simulation methods. 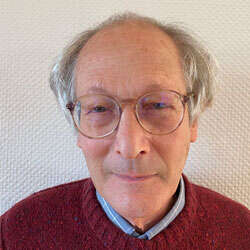 Throughout a long and distinguished career, Professor Daniel Frenkel has pushed the boundaries of what is possible with computer simulations of soft matter, always with a focus on uncovering new and interesting physics. The subtle and surprising ways that entropy increases can drive ordering in soft matter systems (order from disorder) is a longstanding leitmotif in his work. Among his many seminal contributions include early simulations of the hard-core models of liquid crystals, which demonstrated that many complex liquid crystalline phase transitions can be driven by entropy alone. He performed the first quantitative simulations of long-time tails in hydrodynamic flows, confirming the accuracy of mode-coupling theory. He pioneered the use of simulations to study the problem of crystal nucleation, developing powerful new methods to determine nucleation barriers and to evaluate absolute nucleation rates, with applications to a diverse set of soft matter and biological systems. Later, he focused more on biomolecular systems, studying a great diversity of self-assembling systems such as DNA-coated nanoparticles, vesicles and multicomponent mixtures. In each case, the emphasis was on understanding the basic physics, rather than on the chemical detail. He also established popular techniques to compute the disordered packings of jammed particles, which he used to provide the first numerical confirmation of a famous conjecture by Sam Edwards that all jammed packings of granular materials are equally likely.

Arguably the most creative and diverse simulator of soft matter of his generation, Frenkel developed many influential simulation techniques that have been widely adopted across many disciplines. These include thermodynamic integration methods to calculate the free energies of solids, the powerful configurational bias Monte Carlo technique widely used for simulation of polymers and a range of rare-event methods that opened up the possibility of directly studying many previously inaccessible physical phenomena.

Frenkel has also been enormously influential as an educator. His textbook Understanding Molecular Simulation: From Algorithms to Applications, with Berend Smit, helped cement the canon of modern computer simulation techniques and remains the definitive text in the field. He convened an influential set of schools that introduced a whole generation of research students to these computational physics methods. Many of the leading simulators of soft matter systems passed in one way or another through his laboratory. Former members now occupy academic positions across the UK and at research institutions in many other nations.