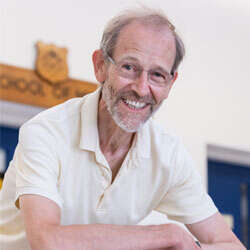 Professor Michael William Finnis is one of a very rare kind of theoretical physicist who has developed theory and models of materials where none existed before and implemented them in unprecedented computations. This required deep physical insight and indeed courage. It is difficult to think of anyone worldwide who has opened more areas of materials physics than Finnis to rigorous, physically based, atomistic computation.

Finnis pioneered some of the most imaginative applications of density functional theory (DFT) to materials. He carried out the first DFT computation of the atomic and electronic structures of a niobium–alumina interface and compared the results with experimental observations. This work described in unprecedented detail the structure and bonding of a metal–ceramic interface, and it defined the protocols for subsequent investigations. He developed a general scheme based on DFT calculations to predict intergranular embrittlement that rigorously distinguished and quantified the relative contributions of the size of the impurity and the changes in chemical bonding induced by segregation. The rigour of his analysis had been sought for more than half a century.

Finnis advanced ab initio thermodynamics of open systems involving chemical potentials. He showed that the thermodynamics of point defects must be included in the theory and computation of grain boundary stability in an ordered alloy. This led to his seminal work on surface and interface thermodynamics of non-stoichiometric compounds. An example is his calculation of the effect of oxygen partial pressure on the structure and energy of niobium–alumina surfaces and interfaces, which became the benchmark for subsequent studies.

More recently, he has developed rigorous approaches to calculating the free energy of materials at high temperatures. This has enabled him to create new methods to predict properties difficult or impossible to obtain experimentally, such as the free energies of ultra-high temperature ceramics.