Dr Ross K Galloway for work in developing, using and communicating research-based approaches to active student learning in physics and other disciplines. 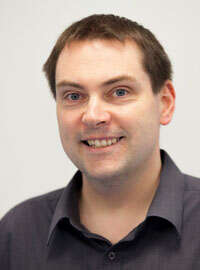 Dr Ross Galloway’s main achievements lie in higher education and fall into two main areas, both of which are pioneering in the UK and both of which have been influential in encouraging take up in many other universities. The first is the use, promotion and evaluation of the flipped classroom approach, in which the transfer of knowledge occurs remotely, usually online, and contact with the teacher involves student-centred activity. Here, Galloway is the UK expert and his work is well-known internationally. The second area is the use of PeerWise, a revolutionary approach to teaching in which students generate content themselves, including questions and problems to be solved by other students.

His work has been the subject of many invited seminars in the UK and elsewhere and also developmental sessions in physics, mathematics, chemistry and other disciplines, including the humanities.

Galloway was part of the Edinburgh team that introduced flipped classroom teaching in 2011, one of the first in the UK to do so. He is considered its most experienced UK practitioner, particularly for large classes, and has carried out many evaluation studies, initially focusing on outcome metrics (e.g. using the Force Concept Inventory to evaluate conceptual understanding). More recent studies have included qualitative aspects of student/instructor behaviour to determine what really works and to disperse the false dichotomy between traditional and active learning, instead focusing on which aspects of student activity result in the most valuable learning.

Galloway was part of the first wave of UK engagement with PeerWise from 2010. The distinctive Edinburgh approach was their extensive use of a research-informed scaffold, to allow students to understand the unfamiliar task of writing problems rather than solving them, to build their confidence and to highlight what is effective assessment. He led the deployment of those scaffolding activities and made many improvements over several years. He also carried out research on how students used PeerWise and determined that, when properly supported, students can generate high-quality questions, indicating deep learning and sophisticated understanding of the physics beyond that typically obtained in more passive approaches.

He is also active in the broader community, including his input into the IOP Degree Accreditation Committee, which he currently chairs. He made a major contribution to the roll-out of the revised accreditation approach, which is less content-focused and places more emphasis on degree outcomes relating to students' conceptual understanding of physics, problem solving and broader skills.