Professor Roger Barlow for distinguished contributions to physics outreach/education, most notably for initiating the Particle Physics Masterclasses, in which hundreds of thousands of school students have participated worldwide over 25 years. 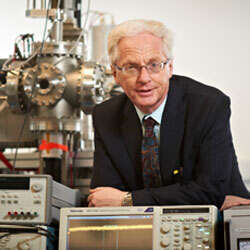 In celebrating the 25th anniversary of Professor Roger Barlow initiating the National Masterclasses in Particle Physics, it is important to appreciate how groundbreaking they were at the time. Then, the standard practice was for an individual physicist to visit an individual school to give a one-hour talk. In contrast, the masterclasses give school students and their teachers a whole day with a local particle physics group. Participants actively analyse real data from large particle physics experiments, see small-scale experiments being conducted, as well as hearing talks. They interact with the research group (PhD students, postdocs and academics) informally over lunch and drinks breaks and in the sessions. They are directly exposed to the enthusiasm and excitement of actually doing particle physics.

Barlow had the experience and vision to see these possibilities, but also the organisational drive and persistence to make them happen. Innovations that seem self-evident now, Barlow introduced for the first time as part of the Masterclasses. The new World Wide Web allowed easy access to software and particle-collider data, which greatly reduced the technical overhead. Clusters of desktop PCs, which had just started to appear at UK universities, gave each Masterclass student direct ‘hands-on’ access to the data, with local physicists on hand to provide guidance. Students were provided with facts, but then challenged to apply the understanding gained in analysing real data. This was truly active ‘learning-by-doing’ rather than merely descriptive outreach.

At that time, particle physics was a relatively new part of the school curriculum and relatively unfamiliar to many teachers. The Masterclasses helped inform and inspire teachers, an impact enhanced by the Summer Institutes for A-level Physics Teachers (Manchester and Bristol 1999–2002), which Barlow proposed, organised and funded (Particle Physics and Astronomy Research Council grant).

The first Masterclasses in 1997 were phenomenally successful and the idea spread rapidly. Thanks to Barlow’s organisation through the IOP High Energy Particle Physics Group, soon every UK particle physics group was running its own event. Then ‘national’ became ‘international’. By the early 2000s, the web-based masterclass analysis was translated into several other languages and was being used in masterclasses across Europe and the US. In time, data from the Large Hadron Collider replaced that from the Large Electron-Positron collider, and experiments have become increasingly ambitious in giving students opportunities to analyse their ‘open data’. The masterclass idea has been taken up in other areas of physics, such as astronomy. A veritable explosion of activities – and the original blue touch paper was designed and lit by Barlow.