Dr Andrew James Shields for pioneering industrial R&D over two decades on quantum communication devices and systems, leading to their commercial exploitation in the UK. 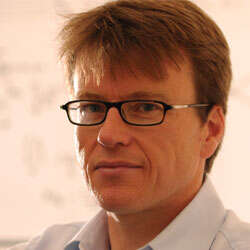 Dr Andrew Shields has been at the forefront of R&D on quantum communications and its applications for over two decades, realising breakthroughs that allow its use in conventional networks. This has led to Toshiba commercialising products for quantum key distribution (QKD), designed and manufactured at their base in Cambridge, which are already deployed in networks around the world.

Quantum communication uses single photons (particles of light) as the information carriers. Shields led the team which invented and patented practical devices that allow these single photons to be detected at gigahertz rates and with low noise. This, in turn, allowed his team to develop QKD systems with unprecedented continuous bit rates, sufficient to generate several thousand encryption keys per second. This enables the technology to be applied to large-scale networks with many users and applications and carrying high data bandwidths.

One of his early contributions was the first demonstration of QKD over 100 kilometres in 2004. He remains at the forefront of the field, co-inventing the twin-field QKD protocol to further extend the range and recently leading its experimental verification over 600 kilometres of fibre, distances sufficient to link major cities in core networks.

He has also made significant contributions to the realisation of next-generation networks based on quantum entanglement, which enable distributed quantum computing and enhanced sensing/timing, as well as secure communications. Shields' team invented the first simple light-emitting diode source of quantum light and demonstrated its use in quantum networking applications on installed fibre networks. These practical semiconductor devices may allow the exploitation of quantum entanglement in everyday life and have inspired strong R&D and commercial activity around the world.

Shields has been instrumental in stimulating the supply chain for quantum technology in the UK, leading the AQuaSeC consortium to develop novel photonic and cryptographic components for quantum communications and to integrate these in novel demonstrators. One noteworthy recent outcome was the first chip-based QKD system, an advance that will allow quantum cryptography systems to be manufactured reliably and uniformly in much larger volumes, reducing costs and extending the range of applications.