Professor Michael Tarbutt for pioneering experimental and theoretical work on the production of ultracold molecules by laser cooling, and the applications of those molecules to quantum science and tests of fundamental physics. 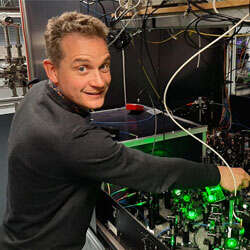 In the last decade, a few research groups have extended laser cooling from atoms to molecules, motivated by the applications of ultracold molecules in quantum science and tests of fundamental physics. Professor Michael Tarbutt is a pioneer of this new field and an author of two important review articles on the topic.

He developed the experimental methods of molecular cooling and the theory that underpins them. He has contributed many of the key ideas now driving the field forward. He showed how to slow a beam of molecules to rest using radiation pressure and how to confine those molecules in a magneto-optical trap. He was the first to cool molecules below the Doppler limit, bringing them to the microkelvin temperatures needed for applications. His insightful theoretical analysis has brought a good understanding of how laser cooling and magneto-optical trapping work for molecules and has stimulated new cooling methods. He was the first to make mixtures of laser-cooled atoms and molecules and study collisions in these mixtures that are important for sympathetic cooling to even lower temperatures.

Pursuing applications in quantum science, he demonstrated coherent control of molecular hyperfine and rotational states and showed that rotational coherences can be long lived, even in the non-uniform environment of a magnetic trap. He worked out how molecules in tweezer traps might be cooled to the ground state of motion, how to implement quantum gates between pairs of trapped molecules, and how to make those gates a hundred times faster by bringing pairs to sub-wavelength separations.

Pursuing applications in fundamental physics, he has used warm molecules to measure the electron’s electric dipole moment, which is an important test of physics beyond the Standard Model, and has cooled those same molecules to the microkelvin regime, promising a huge leap in precision.