Professor Benjamin Doyon for pioneering contributions to a new hydrodynamic theory for the large-scale behaviours of integrable systems, which had a major influence in condensed matter, cold atomic and statistical physics research. 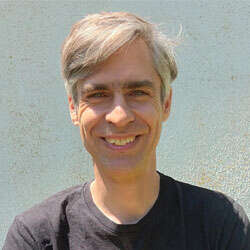 Professor Benjamin Doyon has pioneered the development of a new and extremely successful theoretical framework referred to as generalised hydrodynamics (GHD). He has made sustained and distinguished contributions to GHD since its inception in 2016, and is now a highly respected leader in this field. His work on GHD has deeply influenced research on the large-scale dynamics of extended low-dimensional systems, both quantum and classical. It has provided the foundation for understanding their far-from-equilibrium physics, has found and is still finding applications in quantum integrability, statistical mechanics, dispersive hydrodynamics, condensed matter and cold atom physics, and has been confirmed experimentally. Through Doyon’s work, our understanding of hydrodynamic concepts has deepened, and their range of application widened.

Doyon's contributions to physics far from equilibrium started shortly after his PhD, with his well-received study in 2006 of non-equilibrium impurity models, and seminal works in 2012 on exact non-equilibrium currents and their fluctuations in one-dimensional critical systems.

A breakthrough occurred when Doyon’s team in London (simultaneously with a team in Italy) solved the problem of exact current-carrying steady states in integrable quantum systems. Despite many attempts internationally, this problem had remained unsolved, as the traditional technical tools of integrability failed. Doyon's paper stands out by not only giving the solution for the Lieb–Liniger model experimentally realised in cold atomic gases, but also providing a lucid exposition of the emergence of hydrodynamics in many-body integrable systems, breaking the paradigm that chaos is required for hydrodynamic principles to apply.

Doyon then obtained a substantial amount of new exact results, many of which seemed out of reach before the advent of GHD, including: the effects of external forces, large-scale correlations, diffusion coefficients and current fluctuations. He showed how GHD applies also to classical systems and to previously studied soliton gases. His GHD results have been confirmed by exact model calculations and in numerical studies, and the GHD equations with external force have been confirmed experimentally in three separate experiments on cold atomic gases, where previous attempts at hydrodynamic descriptions had failed. One experiment, co-authored by Doyon, has made the object of a popularisation article in Physics Today.

Going beyond GHD, Doyon has also obtained new fundamental results in the hydrodynamics of many-body systems, including the statistics of large-scale fluctuations in ballistic transport, and a rigorous proof of the emergence of a Boltzmann–Gibbs principle in quantum spin chains.