Professor Michael Holynski for distinguished contributions to the development of quantum sensors, overcoming major technological challenges in underground mapping and demonstrating the detection of application-relevant targets. 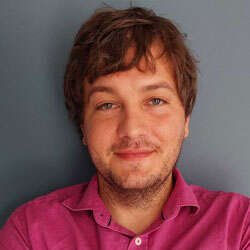 Some say that the underground space beneath the streets of London is less known than Antarctica. This has immense economic and societal impact. Every year, many billions of pounds are spent on delays, cost overruns and digging in the wrong place in infrastructure works due to our limited knowledge of the underground. This translates into millions of hours lost to society while people wait in traffic jams caused by roadworks.

Gravity sensing has long been a desirable tool for obtaining information about the underground. However, it is often not used due to unpractically long measurement times. Over the last decade, Professor Michael Holynski has led the development of quantum sensors for gravity gradiometry. Using the fundamental laws of quantum mechanics allows the creation of two matter-wave interferometer gravimeters coupled by a common laser beam, making the instrument practically immune to vibrations and insensitive to tilt. This allowed Holynski to lead the design and build of an instrument that overcomes the key barriers experienced by classical gravimeters.

The idea for this new quantum technology device was just the starting point of a journey. Demonstrating superior operation of this quantum sensor required it being made robust and practical, such that the exquisite laboratory performance could be translated into the real world. This allowed Holynski to realise a breakthrough, achieving the first demonstration of a quantum gravity gradiometer detecting a feature in a real-world application.

The journey to real-world performance was only possible by a combination of Holynski’s detailed understanding of fundamental physics principles with his outstanding ability to translate this understanding into practical technical solutions. Through his leadership, his group overcame a range of challenges, including counteracting small magnetic field variations by a combination of compact magnetic shielding and a momentum-reversal technique in the interferometer itself. Tiny thermal fluctuations in air density were excluded by a special vacuum design. It was necessary to understand the influence of tilt and control it sufficiently to address projection of Earth gravity gradients onto the measurement axis and the nanoscale variations of laser wavefronts in the interferometer beam.

Much was enabled by inventions within the instrument design, where Holynski realised a new hourglass configuration, which allows the realisation of compact, lightweight and robust instruments, and which suppresses influences from laser intensity and polarisation fluctuations by design. Understanding the commercial value of this invention, Holynski has developed a significant intellectual property portfolio, including six patent applications, and has translated the knowledge to industry with an additional perspective of realising a startup company.