Professor Philip P Allport for broad contributions to particle physics instrumentation, most notably in the establishment of radiation-hard silicon sensor technologies and their deployment in large experiments. 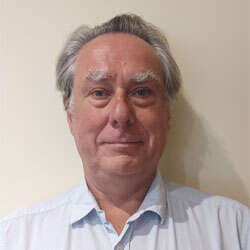 Professor Philip Allport is an international leader in the development of particle physics instrumentation and its implementation in experiments. He has made seminal contributions to radiation-hard semiconductor detector development and to the transfer of particle physics detector technologies for use in medical applications, as well as being central to the recent establishment of a coherent European detector R&D strategy.

Allport’s work at the Large Hadron Collider (LHC) began in 1994, when he led prototyping of the silicon sensors for ATLAS. He was pivotal in the experiment’s silicon technology choices, detailed specifications and sensor testing programmes. He oversaw the construction of the ATLAS Semiconductor Tracker End-Caps, one of which was fully assembled in the Liverpool Semiconductor Detector Centre under his leadership.

Allport has been a long-term leader in the ATLAS High Luminosity LHC upgrade programme, including the role of Upgrade Coordinator in the period spanning project approval (2011–15). He chaired the Institute Board for the Inner Tracker from 2017–21.

Prior to ATLAS, Allport was a pivotal figure in early high-energy physics silicon detectors, making major contributions to the microvertex detector at DELPHI and novel double-sided sensor designs for OPAL. Through the RD20 collaboration, he made the first investigations of whether silicon microvertex technologies could survive LHC doses. He was a founder member of RD50, where he initiated the study of p-type sensors: a cost-effective radiation-hard sensor technology that is now employed for both the ATLAS and CMS tracker upgrades.

Allport has taken a key role in setting the international agenda for future detector developments. He chairs the Detector R&D Panel of the European Committee for Future Accelerators (ECFA), through which he led the development of the 2021 roadmap to implement the instrumentation aspects of the 2020 European Particle Physics Strategy Update.

Allport is currently director of the Birmingham Instrumentation Laboratory for Particle physics and Applications (BILPA) , a project that he conceived and led from the outset. As well as playing a major role in the ATLAS tracker upgrade, his laboratory delivers R&D into novel monolithic active pixel sensors, low-gain avalanche detectors and medical physics applications.

Allport’s work on technology transfer from particle physics to medicine is headlined through the PRaVDA and OPTima consortia, applying radiation-hard sensor technologies to imaging and dosimetry in proton therapy. As part of the COVID-19 response, he chaired the review of the CERN HEV rapidly manufacturable ventilator proposal, which was carried forward through the UK ‘High Performance Low Cost’ Ventilator project, where he co-led the Engineering and Prototyping work package.