Professor Margaret Murnane for pioneering and sustained contributions to the development of ultrafast lasers and coherent X-ray sources and the use of such sources to understand the quantum nature of materials. 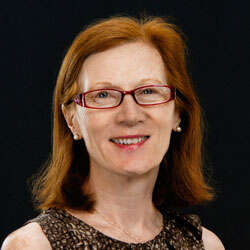 The discoveries of Professor Margaret Murnane in ultrafast laser and X-ray science have transformed the field, making it possible to capture and manipulate quantum dynamics on the fastest timescales relevant to atoms, molecules and materials. Her research is distinguished by its breadth and impact in developing new understanding in optical physics.

Murnane has demonstrated that it is possible to generate coherent, laser-like X-ray beams by upconverting laser light from the infrared directly into the extreme ultraviolet (EUV) and soft X-ray regions of the spectrum. Over more than 20 years, she uncovered how to harness the unique high-order harmonic generation process to create new quantum light sources. This work represents one of the most significant new fundamental developments in optical science in past decades, with a host of practical applications in understanding and imaging materials.

The quest to make coherent X-rays followed the explosive development of laser science in the 1960s. Early research concluded that it would be very challenging because the power requirement for an X-ray laser would be ~1000 billion times that for a visible laser.

In the early 1990s, Murnane led the way in a new generation of laser technology, demonstrating the first simple laser, based on titanium-doped sapphire, that could generate pulses less than 10 femtoseconds (~four optical cycles) in duration. Her work also pioneered the amplification of these pulses to extremely high, terawatt, peak power in a few optical cycles.The technologies she developed sparked a revolution in laser science, with many still state of the art more than 20 years later.

Murnane was the first to recognise that the use of very intense, femtosecond driving laser pulses would be advantageous for X-ray generation. She showed that light from a laser operating in infrared could be upconverted successfully to a wavelength as short as 0.8 nanometres—a >5000th order nonlinear conversion process. Using these sources, she demonstrated the first coherent control of electron dynamics on attosecond timescales, and unveiled the complex pathways for how X-ray-excited molecules fall apart. Very recently, Murnane used coherent (lensless) imaging to solve a long-standing problem – how to build a perfect diffraction-limited X-ray microscope.

Murnane is certainly a role model for a woman in science, making the journey from a childhood in rural Ireland to her current position as director of a new National Science Foundation Science and Technology Center called STROBE. She has forged a formidable research collaboration over many years with Henry Kapteyn.