Professor Erminia Calabrese for distinguished work on observational cosmology using the Cosmic Microwave Background to study the origins, content and evolution of the universe, and to probe new regimes of physics. 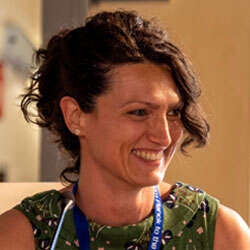 Professor Erminia Calabrese is an observational cosmologist, using the relic light from the Big Bang – the Cosmic Microwave Background (CMB) – to answer questions about the origins, content and evolution of our universe, and to probe new regimes of physics. This is one of the most important areas of contemporary fundamental research, with enormous experimental and theoretical challenges. What distinguishes Calabrese is that she has demonstrated a truly exceptional mastery of all aspects of this endeavour, and has been pivotal in firmly establishing the standard model of cosmology, Lambda-CDM.

Her work has used data from space-borne and ground-based CMB experiments. In particular, she has enabled state-of-the-art results from the Planck satellite and the ground-based Atacama Cosmology Telescope (ACT). She made unique contributions to all releases of Planck data and cosmological results, and led the ACT cosmology pipeline. Accurate and robust cosmological results from both experiments relied on her expertise in characterisation of multi-frequency observations, statistical footing on combining multiple experiments, and modelling and removal of foreground emission. Calabrese’s grasp of the interface between data and theory enabled her to devise reliable approaches to inference-making from complex datasets, and to cross-compare independent observational methods to build a consistent picture. This led to percent-level measurements of the constituents of the universe and its age, and placed the tightest limits to date on the properties of neutrinos, dark matter and dark energy. Her methodologies have now been adopted as standard in the cosmology community.

The next frontier in CMB cosmology is to design, build and analyse observations from a new generation of experiments that will make exquisitely sensitive measurements of CMB polarisation to investigate the earliest stages of the Big Bang, and use it as a high-energy physics laboratory (probing energies far higher than can be attained on Earth) to learn about the physics that drove the beginning of the universe. Calabrese is at the forefront of these efforts, including the ground-based Simons Observatory (SO) and the LiteBIRD satellite, in both of which she has leading roles (as chair of the SO Theory and Analysis Committee, and European co-lead of LiteBIRD). She is also driving a major pan-experiment project to combine CMB data and galaxy survey measurements from the forthcoming Rubin Observatory and the Euclid satellite.

Calabrese’s major achievements and continuing influence at the forefront of observational cosmology are fully deserving of recognition through the award of the Fred Hoyle Medal.