Professor Kieran Thomas Flanagan for pioneering contributions to laser spectroscopy of exotic nuclei, particularly the use of resonance ionisation and its application to single-atom sensitivity in mass spectrometry and trace-metal analysis for environmental testing. 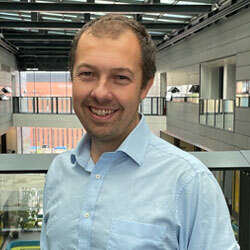 Professor Kieran Flanagan has made outstanding contributions to the understanding of properties of exotic radioactive nuclei via measurement of hyperfine structures revealed by laser spectroscopy. He has identified important applications of precision techniques that he developed and is successfully translating them into business.

From early in his career, Flanagan contributed significant advances in nuclear physics using collinear laser spectroscopy, where interactions between a laser and a beam of radioactive ions are probed via subsequent emission of fluorescent photons. His work was critical in unravelling mechanisms driving the evolution of single-particle levels in exotic nuclei.

Flanagan pioneered the use of collinear resonant-ionisation spectroscopy (CRIS) with radioactive atoms, where poor efficiency for fluorescent photons is overcome by instead measuring the ionization of atoms induced by multiple laser excitations. This results in significantly higher sensitivity, allowing measurements to be made on radioactive species produced at much lower yields, approaching tens of atoms per second in online experiments. As a result, nuclei much further from stability can be studied, probing physics at the edge of current knowledge.

Flanagan developed the concept for the CRIS Experiment at the ISOLDE Facility (CERN) and was the driving force initiating and leading the CRIS Collaboration, which has grown to more than 25 physicists from nine countries. Under his leadership, recent CRIS science highlights include measurements of charge radii of copper isotopes that have driven the first consistent microscopic description of odd-even staggering using effective-field and density functional theory. Measurements of neutron-rich potassium isotopes cast doubt on the new N = 32 magic number below calcium. Most recently, the first measurements have been made on transitions in radioactive radium monofluoride (RaF) molecules. These have demonstrated that RaF molecules could be trapped and laser cooled. This is a major breakthrough providing a new route for searches for electric dipole moments, which are enhanced in these molecules and are of significant interest for physics beyond the Standard Model. This subset of examples shows Flanagan’s outstanding scientific impact that stretches from atomic, molecular and nuclear physics to studies for fundamental interactions.

Flanagan realised that the extremely high sensitivity of the CRIS technique could have significant applications outside of fundamental physics. Through a series of innovation grants, he demonstrated the application to single-atom-sensitive mass spectroscopy and trace-metal analysis, leading to a series of patents. A startup company – Artemis Analytical – was incorporated in 2016 with Flanagan as director providing services for environmental testing, and received first customers in 2020.