Dr Richard Brock for exceptional commitment to engaging students and teachers with the human side of physics, exemplified by inspiring and quirky Stories from Physics, published by the IOP. 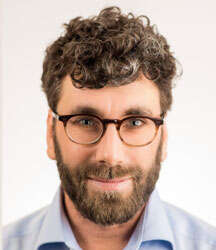 Dr Richard Brock is an outstanding physics educator who cares passionately about teaching and learning. As a physics teacher and teacher trainer, he has inspired thousands of students and hundreds of beginning teachers. And, as a physics communicator, Brock has created a series of teaching resources that have transformed the way learners engage with the subject of physics.

Brock combines a deep knowledge of physics with an equally profound understanding of how some learners have difficulties making sense of physics concepts and, even more fundamentally, seeing themselves as able to engage with the discipline. In response, he has developed a teaching approach that centres upon the learner: he seeks alternative ways to engage learners with the ideas of physics by making the subject seem less alien, more human and an integral part of our everyday lives.

His approach of starting with the learner is evident in his Stories from Physics series of publications. These short, witty, highly readable stories, published as free, downloadable booklets, provide teachers and learners with a personable introduction to the major ideas comprising physics education. In telling the human and humorous stories underpinning key discoveries and developments – from the use and standardisation of units to the properties of matter – Brock succeeds in making complex, and often abstract, concepts come alive. From an educator’s point of view, his unique narrative accounts also serve to make content memorable, providing a ready-made hook upon which to hang further ideas, thus supporting learners’ wider understanding.

How better, for example, to explain the concepts of atomic mass than to introduce a monk who measured the volume of his nose to calculate the number of atoms in a lump of incense? Or, how better to inspire young students who feel that science may not be for them than to share the story of Émilie du Châtelet’s staunch refusal to be excluded from male-only meetings, let alone her propensity for high stakes gambling!

Initial evaluations of the Stories from Physics highlight their accessibility and their broad reach across a range of learner ages and interests. Significantly, they celebrate diversity within science, and the development of new scientific understandings within cultural and historical contexts. As a result, they are now used by teachers to promote an understanding of physics that isn’t stuffy or elitist, but rather the story of people who have sought to investigate phenomena that make up our everyday world.