Professor Polina Bayvel for distinguished contributions to the development of optical communications and the understanding of the physics and mitigation of nonlinear phenomena in optical-fibre transmission. 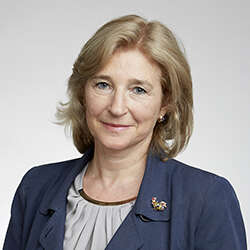 Professor Polina Bayvel has made fundamental contributions to the physics and design of advanced high-bandwidth, multi-wavelength optical communications systems and networks. She pioneered the use of the wavelength domain for routing information and proposed the concept of highly efficient wavelength-routed optical networks.

Key results included the derivation of tight bounds on the number of wavelengths required to interconnect an arbitrary physical topology. These were essential to answer the question of how many wavelengths are needed to enable routing by wavelength, and the requirements on the frequency stability of laser sources and precision of wavelength-selective devices.

Arriving at the answer that the number of wavelengths was finite provided the necessary impetus to grow the optical network infrastructure and wavelength division multiplexed transmission worldwide.

In her research on wavelength-selective devices, a distinctive contribution has been in the development of aberration-corrected, free-space grating demultiplexers and routers, with experimental demonstration of their operation in high-speed network experiments. Current networks using reconfigurable add-drop multiplexers and switches implemented worldwide are a direct result of these ideas.

A major research theme for Bayvel has been the elucidation of fundamental transmission limits due to nonlinear signal distortion to explore the means for its mitigation in high-speed transmission, over a variety of optical-fibre types, and using advanced optical dispersion and nonlinearity compensating techniques.

This resulted in contributions to the understanding of transmission impairments due to various fibre nonlinearities and dispersion, and their interactions. It also led to techniques to improve system performance, including pioneering electronic and optical nonlinear compensation approaches.

The unique experimental laboratory Bayvel has developed includes a recirculating optical-fibre loop testbed, which has enabled rigorous fundamental investigations of nonlinear effects in optical fibres, and is widely used by academia and industry worldwide. Bayvel and her group have shown how coherent detection in combination with digital signal processing algorithms can be used to mitigate the limits of glass nonlinearity and increase data-carrying capacity of optical networks by more than three orders of magnitude.

A key to this has been to incorporate the effect of stimulated Raman scattering into the analytical description of optical-fibre transmission, increasing the accessible bandwidth in the optical fibres and leading to world records on the highest transmission rates over all metropolitan area, landline and transatlantic transmission distances.