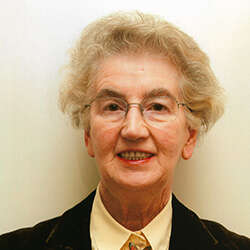 Professor Angela Newing has been a member of the IOP since the 1960s as an undergraduate in Bristol.

She did not take part much during her early career (as a medical physicist), but she did read two of the IOP’s journals and regularly attended their annual exhibitions in London.

Newing became IOP South West Branch treasurer in 2008 and branch chair in 2011. During her chairpersonship, the branch established centres for lectures in Salisbury (via the Defence Science and Technology Laboratory, Porton Down originally), Weymouth (with the Institution of Mechanical Engineers) and Sherborne.

Newing has organised events and meetings in Gloucestershire for more than 10 years, mostly in conjunction with the Institution of Engineering and Technology (IET) at the University of Gloucestershire.

She was elected to IOP Council for four years from 2014, and served on the Audit and Risk Committee at the time when there were lots of risks with the move to the new IOP headquarters at Kings Cross.

She was also on the Membership Committee and, during this very successful period, Newing established the annual nations and branches forum and moved some of the meetings out of London. This, too, was a great success, as Bristol allowed committee members to tour IOP Publishing and Birmingham was much more accessible for those in the north and in Wales.

Newing was chairperson of the Mayneord Phillips Trust for two terms (four years) while she was on the Institute of Physics and Engineering in Medicine (IPEM) council.

This trust was specifically set up to arrange summer schools for PhD students at St Edmund Hall, University of Oxford (Phillips’ old college) every other summer. It was jointly run by IPEM/IOP. They had a couple of excellent schools on lasers and magnetic resonance imaging.

At the same time, she was the IPEM representative on the IOP Benevolent Fund committee.

She now sits on ReMNet – the retired members committee – and has pushed for Council to take an interest in reducing IOP membership for retired members.