Dr XinRan Liu for exceptional contributions to public engagement in the field of particle physics, and for promoting leading UK research and innovation to both national and international audiences. 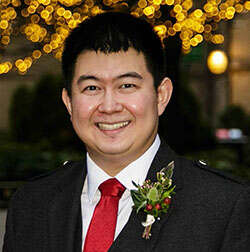 Dr XinRan Liu is an outstanding early career researcher with huge enthusiasm for public engagement. His record of achievement in both research and outreach is already impressive, and the award of this medal cements the foundations for a career that bridges cutting-edge scientific endeavour and high-level public engagement.

Liu’s most remarkable outreach activity is the ‘Remote3’ project, which he conceived and is currently leading. This project enables pupils from schools in the most remote parts of Scotland, otherwise underserved in STEM opportunities, to build, program and operate small robots in the Mars Yard at the Boulby Underground Laboratory.

The project initially targeted 10 schools in remote locations, but was rapidly adapted during the first lockdown of 2020 to reach children learning at home all over the country. It has since expanded to reach after-school activity groups as well, such as the Muslim Scout Fellowship. Alongside targeting underserved children, this project will also target minority groups and women, for which role models within the senior scientific community are few and far between.

Liu was invited by UK Research and Innovation and the Chinese Academy of Sciences to represent the UK at the highly successful joint UK/China Dark Matter Day event in 2019, during which his presentation on UK dark matter research was streamed live to over 44,000 Chinese schools and students, as well as to an international audience. This was followed by a virtual collaboration between the UK and US for Dark Matter Day 2020 watched by thousands of viewers from both countries.

In 2020, Liu was invited by the British Embassy in China to deliver a talk on current UK dark matter research. He has also co-supervised a short film on dark matter that won a CREST Gold Award. Another highlight of Liu’s outreach activities is as a long-term organiser of the Edinburgh satellite of Astronomy on Tap, where an example of one of his many contributions was a live satellite link to the Amundsen–Scott South Pole Station.