Professor Raman Prinja for distinguished long-term contributions to engage and inspire children in physics, including his highly motivating range of books, public lectures and interactive science events for young people. 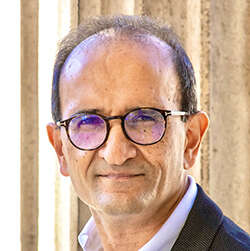 Professor Raman Prinja has made outstanding efforts to engage young people in astronomy and physics through his inspirational range of children’s books and connected public events. Over two decades, Prinja has lead-authored over 20 books, with a wide range of international publishers.

His award-winning books are undoubtedly making a palpable difference in enthusing children and motivating the next generation of scientists. His innovative approach combines insightful text, hands-on activities, and wonderful illustrations. Most importantly, his extensive work encourages children to continue their science reading, and spark discussions at home and in the classroom with peers and teachers.

His engagement at these events has been a tremendous platform for dialogue and exchange with young people using highly interactive formats. Prinja’s science fair events directly impact on budding scientists drawn from diverse backgrounds, ethnicities and genders.

UK Public Lending Rights records show that Prinja’s books have been consistently loaned over 10,000 times per year from libraries. Since his books are also located in numerous schools, the total number of students internationally that have benefited from his outreach work is in the millions.

Prestigious book awards received by Prinja from the American Institute of Physics, the American Association for the Advancement of Science and the Royal Society have also been excellent platforms for direct two-way connections with the young readers that he is inspiring in physics (e.g. book selection panels of children in over 500 UK schools). His latest books (2019-22) have been formally partnered with the Science Museum and Royal Museums Greenwich, adding to the impact of his public engagement in physics.

Prinja is head of the physics and astronomy department at University College London (UCL), and a recipient of provost, faculty and department teaching awards. He is an exemplar role model for the BAME community who is having an impact not only on the young people who read his books, but also on UCL as a whole to encourage more outreach (for example, he has secured Ogden outreach posts).

His dedication to public engagement in science is in addition to his very active astrophysics research and highly rated performances in undergraduate teaching.

The excellence of Prinja’s career-long physics public engagement makes him a very worthy recipient of the 2021 Lise Meitner Medal.