Brian Corbett for serial identification and creation of breakthrough innovative photonic device technology solutions that have driven the development and growth of several startups, and major innovations by multinational corporations. 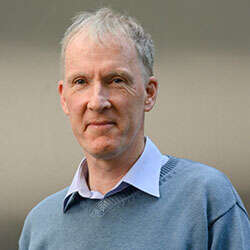 Brian Corbett has consistently identified, created and deployed breakthrough technology solutions, resulting not just in scientific but also tangible economic impact, including the development and growth of several startups, and major innovations by multinationals based in the UK and Ireland.

This is measured by the continued investment by companies to commercialise Corbett’s ideas, which has led to the creation of hundreds of highly skilled physics-based jobs across these islands.

Corbett has always demonstrated leadership in innovation and technology. He invented the technology that enabled the establishment of Eblana Photonics (2001) to commercialise a scalable laser manufacturing technology which drives down the cost of high-performance, single-wavelength lasers for diverse mass-market applications.

His work on resonant-cavity light-emitting diodes (LEDs) helped launch Firecomms, the first-ever Irish startup to be acquired by a Chinese corporation (ZJF). The acquisition included a €5m ($4.2m) investment in Firecomms’ engineering team in Cork, resulting in the growth of the team to around 30 today.

He was also key to attracting X-Celeprint to establish their global headquarters in Tyndall in 2013, with X-Celeprint’s CEO accrediting the decision to the capabilities and vision of Corbett and his team. The company is developing and licensing patented Micro-Transfer-Print technology – a cost-effective and scalable manufacturing process for integrating microscale photonic devices onto silicon-based structures.

Corbett’s record as a game changer was further confirmed with the acquisition of InfiniLED in 2016 by Facebook. Based on Corbett’s patented microLED technology, InfiniLED was founded in 2010 to commercialise this low-power technology, known as ILED display, that delivers the most energy-efficient and high-brightness displays. Throughout, Corbett has supported InfiniLED from incubation, through funding rounds and ultimately to acquisition. Facebook’s investment in Cork has grown to more than 100 mainly physics-skilled scientists and engineers to develop Corbett’s technology into one of the world’s best augmented reality platforms.

Not only is his work with startups and SMEs critical to the development of the Irish entrepreneurial and enterprise ecosystem, Corbett’s partnerships with multinationals have ensured enduring and fruitful relationships with companies such as Intel (as recognised by their 2013 Outstanding Researcher Award) and Seagate (e.g. Seagate’s Heat-Assisted Magnetic Recording (HAMR) programme). Through his leadership and vision, more companies will spin out and grow – one is currently targeted on superluminescent LEDs.

Brian has raised visibility of Ireland’s high-impact technology ability significantly on the world stage. He is an outstanding recipient for the Katharine Burr Blodgett Medal and Prize.