Professor Carla Figueira De Morisson Faria for distinguished contributions to the theory of strong-field laser-matter interactions, particularly the development of semi-analytical models bringing together attoscience and mathematical physics that provide vital tools to the physics community. 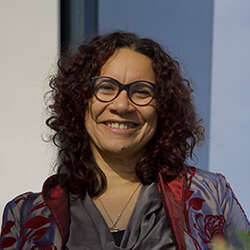 Professor Carla Figueira De Morisson Faria is a world-leading physicist in the field of strong-field laser-matter interactions. She performed the first analytic studies worldwide of below-threshold nonsequential double ionisation (NSDI), and presented a unique interpretation of this phenomenon as time-ordered, above-threshold ionisation-like processes.

She broke new ground by showing that quantum interference may survive focal averaging in NSDI, thus challenging the 20-year-old assumption that this phenomenon is classical.

Faria also made key contributions to pseudo-Hermitian Hamiltonian systems by being part of the team who developed the theoretical framework for time-dependent systems. Furthermore, in her early work, a uniform asymptotic expansion was first applied to strong-field physics. The approach has since become widespread in her field.

In addition to these very substantial individual achievements, from 2013-16 she coordinated a large interdisciplinary, multi-institutional collaboration involving University College London, the University of Leeds and Lancaster University, in the framework of a project entitled ‘Orbit-Based Methods for Multielectron Systems in Strong Fields’, with the objective of bringing methods from mathematical and chemical physics to attoscience, and of developing novel approaches.

This is an example of her broad-ranging collaborative work, in which she leads colleagues in the development of novel approaches to understanding matter in strong fields. These collaborations have paved the ground to some of the most comprehensive studies of photoelectron holography to date. Moreover, her research students have obtained around 20 prizes at local, national and international level, providing strong evidence of her excellent supervisory skills and the high quality of her research.

Faria’s work has a long-term focus on modelling correlated multielectron dynamics in intense laser fields. The most widespread approach for modelling such systems is the strong field approximation (SFA), which exhibits severe limitations.

Only a handful of groups worldwide has succeeded in developing analytic approaches beyond the SFA, and Faria’s group is particularly notable amongst these, having pioneered the first consistent path-integral formulations of strong-field phenomena, which are among the most advanced semi-analytical methods in her discipline.

The orbit-based models she develops are numerically inexpensive and thus suitable for addressing more-complex systems. They are also intuitive, transparent, and allow particular features to be switched on and off at will. Their predictive power has hugely increased understanding of quantum interference in the subfemtosecond regime and attracted the attention of leading experimentalists.

The importance of these contributions and their wide-ranging relevance make Faria an impressive recipient of the Joseph Thompson Medal and Prize.