Dr Bartomeu Monserrat for exceptional contributions to the development of computational techniques that bring temperature to modern electronic structure methods, and their application to topological materials, photovoltaics, superconductors and planetary physics. 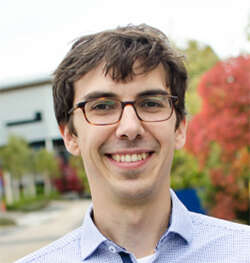 Dr Bartomeu Monserrat develops new theories and computational models to investigate how the quantum behaviour of matter determines the macroscopic properties of materials. His work has unveiled phenomena with critical implications across the physical sciences – from quantum technologies to changing our understanding of fundamental pillars of physics such as the speed of sound or the age of stars.

One of the traditional limitations of quantum mechanical simulations of materials is that they are restricted to the absolute zero of temperature. To anyone who has observed everyday phenomena, such as ice melting, it is evident that the properties of materials can change dramatically with temperature. This means that quantum mechanical simulations are severely limited in their predictability and applicability.

Monserrat’s breakthrough contribution, proposed in a series of sole-author papers, is the solution of the temperature problem. Using a combination of physical insight and mathematical number theory, Monserrat has presented ground-breaking developments that reduce the computational cost of finite temperature simulations by orders of magnitude; calculations that would take a year to run are now completed in under a day. The generality of the method makes it applicable to a wide range of areas, and two examples are detailed below.

The properties of topological materials, with relevance to low-power electronics or quantum computers, cannot survive room temperature conditions, precluding practical technologies. Monserrat’s work has revealed the microscopic mechanisms that destroy topology with increasing temperature. He has then been able to bypass these detrimental effects to predict the first example of a material in which temperature promotes rather than suppresses topology, paving the way for technologies based on topological matter.

Beyond technologically relevant applications, Monserrat has used his new theories to study matter under the extreme conditions of temperature and pressure found in stellar bodies. A highlight is the discovery that helium no longer behaves as the textbook noble gas with which we are familiar, but surprisingly can form compounds.

Importantly, helium is a major component of white dwarfs – the end stage of the lives of stars like our Sun – and their cooling rate is one of the mechanisms used to date the cosmos. Monserrat’s new discoveries about helium imply that white dwarf stars are older than previously thought, calling for a revision to the dating of parts of the universe.

Overall, Monserrat’s work has established a powerful computational framework that enables a plethora of applications across the physical sciences.