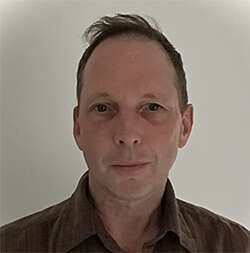 Professor Mark Lancaster has made the most precise measurements of two defining quantities in the Standard Model of particle physics: most recently, the anomalous magnetic moment (g-2) of the muon, which is the most precise quantity ever measured at a particle accelerator; and previously, the mass of the W boson, the most precisely determined quantity at a hadron collider.

This received worldwide attention in April 2021, with an estimated media reach of more than 3 billion people.

Until recently, Lancaster was one of the two spokespeople of the Fermilab Muon g-2 collaboration comprising 200 physicists across seven countries, and he initiated and has led the UK’s involvement in the experiment since 2013.

Lancaster started and led for more than 10 years UK involvement in the Collider Detector at Fermilab (CDF) programme, where his measurement of the W boson mass, along with the top-quark mass, predicted the mass of the Higgs boson prior to its discovery in 2012.

His contributions led to a predicted mass that was within 1.3 standard deviations of that measured at the Large Hadron Collider (LHC). This vindication of the Standard Model’s prediction for the existence and mass of the Higgs boson was the crucial missing piece of the Model.

Earlier in his career, Lancaster led the first determinations of the proton’s structure in the so-called low-x region, where there were conflicting predictions from perturbative quantum chromodynamics (QCD) and more-phenomenological models.

These measurements confirmed the validity of perturbative QCD in this region, further establishing it as the definitive theory of the strong interaction, which has had significant subsequent ramifications for the LHC programme. This programme relies on precise predictions of the proton structure in the low-x region.

Lancaster has an established track record of leadership across three areas in particle physics and has created three new experimental programmes in the UK. In each area, he has achieved the world’s best measurements which have been critical in testing the internal consistency of the Standard Model to an unprecedented level.