Dr Rebecca Bowler for exceptional contributions to the observational study of the first galaxies in the universe, where she has provided the benchmark for future studies with new facilities. 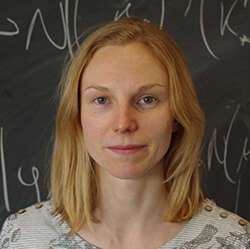 Dr Rebecca Bowler has established herself as a world expert in the selection and detailed study of the most luminous galaxies at cosmic dawn. In this most competitive of fields, her work stands out as being novel and rigorous, and continually challenges theoretical predictions for the formation of highly star-forming and massive galaxies in the early universe.

She is now set to take her work – which has been predominantly based on deep ground-based imaging data – to the next level, combining insights from the forthcoming Euclid mission with data from the ground-based Rubin Observatory.

Contrary to previous predictions, Bowler’s work has demonstrated that highly luminous objects do exist into the epoch of reionisation, and that quenching processes are not efficient at this time – representing a revolutionary discovery. Bowler’s papers on the first galaxies are all highly cited and her work is critical for predicting the yield of next-generation, wide-area surveys such as Euclid, where she is the co-lead of the Lyman-break galaxy working group, and Rubin, where she leads the photometric redshift and SED fitting working group within the Galaxies Science Collaboration.

She has been awarded time on some of the most competitive facilities available for astronomy, namely the Hubble Space Telescope, the Atacama Large Millimeter/submillimeter Array (ALMA) and the Very Large Telescope, all as principal investigator – a testament to her standing in the community early in her career. With the launch of the James Webb Space Telescope, where she is a member of the NIRSpec Guaranteed Time Observations team, along with continued observing access to ALMA, her future success is assured.

She was awarded the Aspen Center for Physics Block Award for ‘promising young physicist’ in 2016, the Royal Astronomical Society Winton Award in 2018 for the postdoctoral fellow whose career has shown the most promising development, and in 2020 was the Tinsley visiting scholar to the University of Texas at Austin.

Bowler has also devoted significant time to outreach and equality, diversity and inclusion activities, both within the University of Oxford (President of the Oxford Women in Physics Society) and in wider collaborations.