Professor Roger L Davies for seminal contributions to understanding the nature and evolution of early-type galaxies and developing their use as cosmological probes. 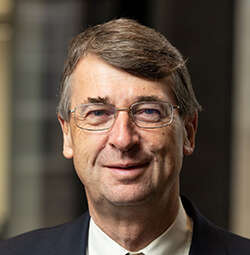 Davies is an international leader in the study of ETGs. He has measured their internal kinematics, their three-dimensional shapes, the ages and composition of their stars, and their dark matter content. His work provides the fundamental data against which theories for the origin and evolution of ETGs are judged.

Following the discovery that the shapes of some ETGs arise from their anisotropic stellar orbits, Davies showed that this applied to the most-massive ETGs, with both lower mass galaxies and the bulges of spirals exhibiting rotation consistent with their flattened shapes. He made exquisite stellar kinematic maps of ETGs using the innovative SAURON spectrograph, showing that many galaxies visually classified as disc-less are fast rotators, thus revealing their true physical nature.

The follow-up ATLAS3D survey compared the stellar mass with total mass of ETGs leading to accurate estimates of the dark matter content, ranging from 15-40%, and showed that the great majority – the fast rotators – share a common evolutionary path related to the formation of early-type spirals and are distinct from that of their slowly rotating, more massive counterparts.

Davies’s detailed observations are the foundation for the widely accepted view of how ETGs assembled. He provided the groundwork in suggesting that massive ETGs formed early, in short bursts of star formation, whereas in lower mass systems star formation was sustained for much longer.

Furthermore, he has recently found examples of massive galaxies with an enhanced fraction of low-mass stars concentrated in the centre, reverting to the Chabrier distribution at large radii, and supporting the two-stage formation theory for the most-massive ETGs.

Davies’s work has also been influential in studies of large-scale structure. As part of the Seven Samurai collaboration, his expertise was critical in discovering the fundamental plane, a redshift-independent distance indicator used to discover the large-scale flows of galaxies. These gravitationally induced motions led to the first comprehensive maps of the local density field. The fundamental plane is used extensively for measuring galaxy evolution and distances to high redshift.

For his influential work on the origin and evolution of galaxies, with unique applications in studies of large-scale structure, Davies is a worthy recipient of the IOP Hoyle medal.