Professor Philip Stier for pioneering research on the role of clouds and aerosols and their interactions in the climate system, through an innovative combination of models, observations and theory. 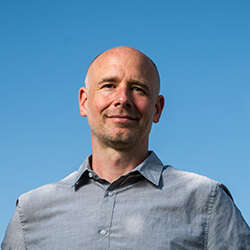 Professor Philip Stier’s pioneering work on clouds and aerosols and their interactions – combining numerical models, observations and theory – has led to significant advances towards the reduction of uncertainties in our understanding of perturbations to the physical climate system.

With the development of microphysical aerosol-climate models, he has contributed to a paradigm shift in aerosol-climate modelling, replacing inconsistent bulk formulations with physically based, self-consistent aerosol representations. Innovatively combining satellite retrievals and models across scales, he has demonstrated the importance of widely ignored confounding factors in satellite-based assessments of aerosol-cloud interactions, and is developing novel methodologies to overcome these obstacles.

More recently, Stier and his group have made major contributions to our understanding of aerosol effects on precipitation, developing a physically based framework to unify bottom-up estimates, and modelling and observing a complex chain of microphysical processes, with top-down constraints from energy- and water-budget considerations. This provided the means to explain the contrasting response of regional precipitation to absorbing aerosols between the tropics and extra-tropics.

Recognising the complexity and need for collaboration in working with big heterogeneous datasets, Stier drives the development of open-source community tools for modelling, analysis and inter-comparison, which are widely used internationally.

Stier has also made significant contributions to the training of future environmental physicists: through undergraduate teaching, tutoring and mentoring, the training of doctoral students and early career researchers, and in particular also through the setup and curriculum development of the physical climate stream in an interdisciplinary graduate school.

His research is productive and internationally recognised: during his 21-year career to date, Stier has published over 180 peer-reviewed publications with an h-index of 56 and more than 16,000 citations, and joined the list of Highly Cited Researchers in 2014.