Athanasia Tzelepi for significant and sustained contributions to the management of graphite in nuclear reactors, providing key technical expertise and advice supporting continued operation and decommissioning of the UK reactor fleet. 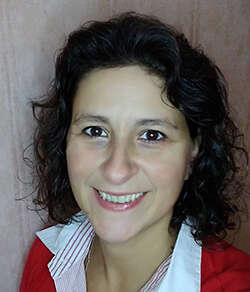 Athanasia Tzelepi has over 20 years of experience providing direct support to the continued safe and efficient operation of multiple generations of UK nuclear reactors. Her expertise has been key to ensuring the availability of Magnox and AGR nuclear reactors.

She has also played a crucial role in shaping the UK’s graphite research capability, which has made significant advances in developing ground-breaking knowledge, principally in the areas of graphite irradiation behaviour and novel methods of graphite characterisation on small samples.

After completing her first degree in Greece and master’s at the University of Strathclyde, Tzelepi started as a graduate at British Nuclear Fuels Limited, and since then has contributed to research and development on graphite for nuclear reactors. She now leads a significant capability within the UK’s National Nuclear Laboratory (NNL), which is recognised internationally for its contribution to the subject area.

Tzelepi has gained a national and international reputation for her leading knowledge and understanding of performing material property tests on graphite. Since 2017, she has chaired the American Society of Testing Materials (ASTM) D02.F committee on manufactured carbons and graphite.

This committee reviews and writes the globally recognised standards for testing graphite. She received the ASTM President’s Leadership Award (2016) and ASTM appreciation award (2014) in recognition of her years of outstanding service and active participation on the committee.

Over this time, Tzelepi has contributed to research that supports the decommissioning of reactors, operation of the current fleet and development of advanced reactors, where graphite forms the bulk moderator in novel fuels. Her technical knowledge and experience of the wider nuclear industry has allowed her to communicate the strategic importance of graphite research to stakeholders, including an International Atomic Energy Agency project Irradiated Graphite Processing Approaches (Gra-PA).

This has ensured that up-to-date methods are available and can be used for graphite waste management in the UK nuclear industry, reducing the risk and cost of reactor decommissioning.

Understanding of the graphite moderator in current reactors has been a key factor in supporting life extension of the current fleet of reactors, ensuring continued generation of clean energy in the UK. Into the future, her knowledge of materials properties testing on irradiated graphite is being applied to Generation IV nuclear reactors.

Tzelepi is an active committee member of the British Carbon Group, an Honorary Fellow at the engineering department of the University of Liverpool and an NNL Laboratory Fellow. In 2018, she won the NNL Impact Award for ground-breaking research.