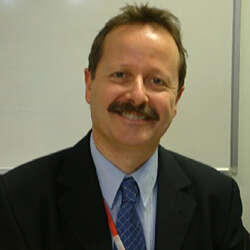 Professor Leigh Canham has made breakthroughs in fabricating nanostructured silicon, understanding its optical and biological properties and developing its applications in industry. In 1990, he discovered efficient visibly luminescent silicon is produced by nanostructuring, circumventing limitations due to the indirect band gap in silicon (which renders electron-hole recombination very slow).

The resulting single-author paper has more than 10,000 citations on Google Scholar. He went on to establish that this enhancement was due to quantum confinement of the carriers in 1991, and subsequently made several important contributions to this area.

In 1995, Canham turned to biological applications of silicon. These had been held back by silicon’s incompatibility with blood, which frustrated efforts to build chips communicating with biofunctions. However, Canham showed, in vitro, that nanostructured silicon escaped from the constraints which were experienced with monolithic silicon.

It was biodegradable and orthopaedically active: it could stimulate bone growth. This required careful analysis of pore size: the highly porous material dissolved in the simulated body fluid, but low-porosity material was stable.

After 1999, he moved into commerce to exploit his ideas on the biological applications of nanostructured silicon. He collected around 100 patents during that time, working as chief scientist with companies in the UK, Australia, Singapore and the US. The last company progressed to Nasdaq listing and focused on the results of one of Canham’s papers for drug delivery to the eye.

In 2001, Canham patented the invention of silicon-based brachytherapy using neutron transmutation doping. This has progressed to clinical trials for pancreatic cancer in the UK, Singapore, Australia and the US.

In 2011, he patented the invention and development of a scalable process to manufacture inexpensive nanostructured silicon from plants which accumulate silicon, such as bamboo. His current research focuses on this and he plans to work with scientists in Kenya to harness natural porous materials for slow release of natural mosquito repellents to minimise malaria infection.