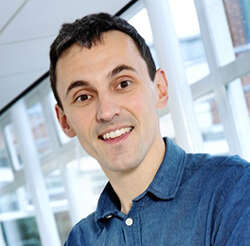 Dr Chris Edmonds has co-created and delivered Tactile Collider: an immersive workshop for visually impaired (VI) children. This audience is massively under-represented in science, with many VI young people given the impression that science is not for them.

The project has revolutionised the way young people with VI learn about physics through the use of soundscapes and specially developed tactile objects. Tactile Collider was covered by media around the world and has been recognised internationally through the European Physical Society High Energy and Particle Physics Outreach Prize for “outstanding outreach achievement as a unique project” and with the Royal National Institute of Blind People See Differently Award for Innovator of the Year.

Edmonds’ contributions have helped inspire other science engagement projects to look at accessibility for children with sensory impairments, helping to promote inclusivity. He created acceleratAR, a first-of-its-kind augmented reality app that enables anyone with a smartphone to build a particle accelerator on their coffee table.

Users design their accelerator by placing paper cubes, allowing them to take a hands-on approach to exploring accelerator physics. acceleratAR was named as favourite science app by BBC Science Focus and Popular Science. It has been used extensively within classrooms and has been included within public engagement activities by labs and institutions from around the world.

Edmonds was the academic lead behind Interaction Point, a collaboration with arts organisation FACT, which looked at ways art and science can be brought together to explore multidimensional perspectives and allow people to explore physics using their own language.

Interaction Point’s deep engagement programme took cohorts of young people on a 27-hour transformative journey through art and accelerator science over a period of six months, inspiring them to think about physics in a new way.

The collaboration was presented at festivals engaging more than 2,000 young people and over-60s groups. Collaboration with Interaction Point has changed FACT’s approach to STEM projects, which will in future include scientists as guides through research topics, rather than as sources of knowledge.

During the 2020 lockdown, students continued to gain hands-on lab experience using interactive virtual learning strategies and home lab kits designed by Edmonds. His approaches have been adopted by many others and were recognised with a University of Liverpool teaching award.