Dr Ying Lia Li for developing her pioneering quantum sensing research into an inertial sensor startup to commercialise breakthrough optomechanical accelerometers, and for her drive to build a better and more supportive research community. 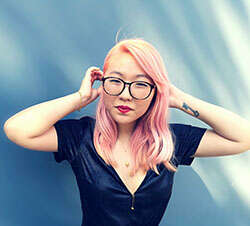 Her sensors will enable precise position sensing when GPS is unavailable; for example, within indoor or underground environments. Her work has led to three filed patents and, so far, over half a million pounds in funding from academic grants, startup competitions and industry support.

Building upon quantum experiments developed in her PhD and microelectromechanical systems experience in her previous role at the Advanced Technology Centre, BAE Systems, Li has translated fundamental physics experiments into miniaturised prototypes, allowing a level of control and optimisation that helped her navigate through a crucial point in the commercialisation process where so many other projects fail.

In 2017, Li partnered with the Defence Science and Technology Laboratory to field test a portable accelerometer prototype under off-road driving conditions, demonstrating robust operation under space launch-equivalent shocks and forces.

Since then, Li has expanded her expertise from optical fibre/bulk optics to silicon photonics, becoming an advocate for photonic integrated circuits on the UK stage, and championing the commercialisation of high-volume, chip-scale optical inertial sensors. In 2020, Li founded a company – Zero Point Motion – and gained funding to bring her sensors to market.

Her work has been recognised through the Engineering and Physical Sciences Research Council, the Royal Academy of Engineering, Google Arts & Culture and the Nature/Entrepreneur First Innovation Forum in Quantum Technologies, and has led to invited talks at international conferences and seminars.

Li uses her understanding of commercialisation to help others, having given invited talks through SPIE, UCL-Quantum and TigerinSTEMM on her commercialisation journey, as well as writing roadmaps for future directions of quantum sensing in journals such as Advanced Optical Technologies and Nature Nanotechnology, and helping to organise talks through Q-Turn and UniKORN. She is an experienced science communicator, co-founding the Quantum Workshop project to engage the public in quantum science, including at the Cheltenham Science Festival and the Science Museum in London, and speaking at countless other events.

In addition, Li is an advocate for equity in science. She led the Women in Physics group at University College London (UCL) between 2017 and 2019, and is currently a member of UCL’s Race Equality Steering Group. In 2021, she worked with Dr Erinma Ochu, Dr Hope Bretscher and Professor Rachel Oliver to publish an article titled ‘Racism, equity and inclusion in research funding’ in the Science in Parliament journal.

Li is spearheading her own path between academia and industry, and is working to make this pathway more equitable for others.